SOLD OUT - POWER PASS RESTRICTED
Kitchen Dwellers & Daniel Donato - Galaxy Grass x Cosmic Country Tour  It's a two-prong attack of the Space Cowboys in October as Kitchen Dwellers take us on "A Journey to Outer Bluegrass" with support from "Cosmic Country" artist Daniel Donato.
Among the many natural wonders in Montana, Wise River runs for about 30 miles through the Southwestern region of the state, cutting through the mountains and flowing into the Big Hole River. Beyond being a favorite spot for fly fishermen, it remains etched into the topography of the land itself. Two hours away in Bozeman, Kitchen Dwellers equally embody the spirit and soul of their home with a sonic palette as expansive as Montana’s vistas. The quartet—Shawn Swain [Mandolin], Torrin Daniels [banjo], Joe Funk [upright bass], and Max Davies [acoustic guitar]—twist bluegrass, folk, and rock through a kaleidoscope of homegrown stories, rich mythology, American west wanderlust, and psychedelic hues. After amassing 5 million-plus streams, selling out shows, and receiving acclaim from Huffington Post, Relix, American Songwriter, and more, the group brings audiences back to Big Sky Country on their third full-length album, Wise River, working with Cory Wong of Vulfpeck as producer.

Incubated to the sounds of the Dead, educated by some of Nashville’s finest players, and having more than 2,000 shows under his belt and a social media presence, Daniel Donato is indeed a millennial whirligig of creative fire. He’s been dabbling in professional music since the age of 14 and yet he’s just getting started. A Young Man’s Country is the portrait of a restless artist as a young man, one whose story is singular and is still in its exciting, early chapters -- and as this effort shows, the future is indeed cosmic.
FOOD TRUCK: Paper Dragon Foods
DOORS: 6:30p | SHOW 7:30p
5 Points Music Foundation is recognized 501c3 whose mission is to pursue the power of sound through live events that support access to music therapy, hearing loss advocacy, and accessibility initiatives. Read our story here. 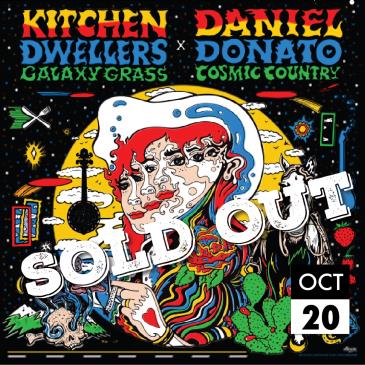