All Doors open at 6pm

KINGS OF SPADE are a high-energy, shameless dancing, foot-stomping brand of Blues Rock’N’Roll.  Fronting Kings of Spade is fluorescent-mohawked, Kasi Nunes, who’s fiery vocals recall a hybrid of soul queens Janis Joplin and Aretha Franklin.  Always wanting to push the bar at live shows KOS is in constant collaboration with other performers including dancers, musicians, or niche visual artists.  They won 1st Place in the 2014 & 2015 Honolulu Pulse Awards “Best Local Rock Band” category, but have always set their sights on National touring.

With music conceived in their hometown in Honolulu, Hawaii, KOS jumped at the opportunity to record in Nashville, TN with 2016 Grammy-winning producer, Dave Cobb (Sturgill Simpson, Chris Stapleton, Rival Sons). With the help of a successfully over-funded Kickstarter project to raise funds to record with Cobb, KOS finished their 2nd self-titled album which has since been nominated for a 2015 Hoku award for Best Rock Album. In 2016-17 they completed multiple tours including US, UK, and EU with prog icons King's X.

The KINGS are no strangers to big audiences. Their energetic live show beat out 50 other competing bands to win the opening slot for Bon Jovi’s Circle Tour and has also landed them as the openers for other world-famous acts like King’s X, The Struts, Rival Sons, ​Deftones, Everclear, Pepper, and Mutemath. Their song “Boys In The Band” is featured on the film soundtrack for the Warner Brothers released Utopian Society.

FLYING BUFFALOES, as a band, represents the essence and energy of the current musical climate in Nashville; the converging of the traditional country honky-tonk mentality with the new wave of gritty East Nashville rock & roll. Their sound is reminiscent of The Eagles, vocally, with Beatles-esque harmony and a swampy, Rolling Stones-meets-CCR rhythm section. Country influences like Waylon Jennings. Willie Nelson, and Chris Stapleton really shine through in Flying Buffaloes songwriting, instrumentation, and lyrics.

This menagerie of influencers is evident in the group’s upcoming debut release, Taking Off, which features songs written by co-frontmen Barry Stone, Johan Stone, and Jordan Harazin. While running the emotional gamut with songs about friendship, lovers’ scorn, and growing up, The 5-track EP has a prevailing feeling of unity, borne out of the frustration experienced by each of the five band members in dealing with Berlin, Germany native, Johan Stone’s immigration troubles.

“We’d have these sporadic, highly creative periods together, and then [Johan] would have to return to Germany to work out his visa,” says drummer, Danny Pratt.  “It’s been a struggle, but the whole experience has brought us closer together.”  It’s the emotions induced by this struggle, coupled with the guys’ strong friendship and a sense of levity, that make Flying Buffaloes’ live performance so engaging.

Smiles are often exchanged, mid-song, between band members as they ebb and flow through a range of dynamics and grooves. Lead guitarist Tommy Leland adds, “When it comes down to it, our show is all about having fun and connecting both as a band and with the audience. We just really like being out on the town together and hanging.” It’s this shared social and music connection that has allowed a guy like Johan from an ocean and a continent away to instantly fit in with a bunch of midwesterners and furthermore, resonate with listeners across the globe. You can hear Taking Off  and find Flying Buffaloes on tour, Summer 2017. 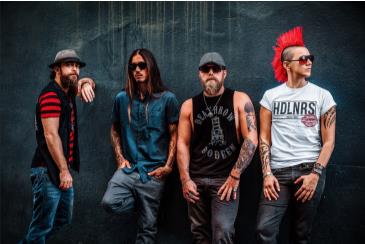