Keys N Krates formed as the brainchild of drummer Adam Tune, synth/keyboard aficionado David Matisse and internationally award-winning turntablist Jr. Flo. The Toronto trio came together in 2008 with the desire to bring their blend of live electronic instrumentation to the stage.

They’ve often been referred to as the world’s only “trap band,” a title they reluctantly accept. Tune says it best: “At the end of the day, people are going to call us whatever they want. We are referencing everything from classic house music to Timbaland in our beats, but I think the trap references tap into what the current sound is, and we are okay with that.”

Having toured their unique blend of hip hop and bass music extensively across North America, Keys N Krates put out a slew of original music in 2013. The September release of their SOLOW EP on Steve Aoki’s Dim Mak Records featured KNK’s banger “Treat Me Right” which launched with the support of figureheads like Diplo, Major Lazer, Flosstradamus and TNGHT. It went to number one on Hype Machine, continues to chart on Beatport Hip Hop Chart, and remains a fixture in DJ sets and car stereos around the globe.

In September 2014, the band launched into the next phase of their musical journey with the release of the “Every Nite EP.” This 6 track offering aptly demonstrates their evolution as a band, as well as their loyalty to the unique fusion of hip-hop and electronic music that they’re known for. The first single off the new EP “Are We Faded” debuted on Annie Mac’s BBC Radio1, as well as the highly influential Youtube channel All Trap Music. The track has already amassed over 1 million plays, and been supported by the likes of Machinedrum, What So Not, Hudson Mohawke and Plastician.

Perhaps what truly separates Keys N Krates from the mass of electronic and hip-hop producers out there is the unique show they create by performing their bassy beats as a band, completely live. When you go to a KNK show, you will see their music and the music of others morphed and turned on it’s head using only drums, keys, turntables and live sampling. This unique style creates not only a crazy dance party, but an experience and vibe like no other.

As a result, Keys N Krates have found themselves performing for fans across Europe and North America, headlining the Every Nite Tour in 2014, and playing at some of the world’s largest Music Festivals, including: TomorrowWorld, Lollapalooza, Electric Zoo, Ultra Music Festival, Osheaga and Sonar Festival (to name a few). As Matisse says, “Our favorite thing is playing live and bringing people into our world.” 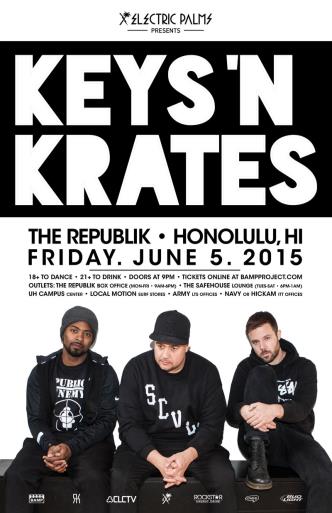