Lemmy’s Child is a rock band who brought their classic rock and mysticism around the West Coast.

Born from the ashes of the ancient South of Italy and the Northern winds of Sweden, the bandleaders Elin and Morgan, began composing together in LA during the early stages of the global pandemic. Mystic ballads with psychedelic influences and Cobain like melancholia.

They enchanted a roaring audience with their unique style at the Social Garden Music Festival in San Diego. During this underground event, the duo understood the true power of their songs. Since then they have been on tour in Colorado and this autumn awaits concerts in several of LA's classic music venues such as the Mint, Molly Malones and The Viper room.

Their music carries them aloft into the realms of self-exploration, from the blinding city lights to wild nature.

Mess of Wires entangle grunge intensity and rock expanse with instrumental proficiency and undeniable attitude. Beyond packing shows, the Southern California trio—Niko Nicholas [lead vocals, guitar], Sam Edelman [drums, backing vocals], and Jersey Sullivan [bass, backing vocals]—have attracted fervent critical acclaim. In an issue of KERRANG!, international tastemaker Daniel P Carter promised, “Fans of classic rock-tempered grunge are gonna be jumping on this as soon as they hear it.” Not to mention, they shared the stage with everyone from Missing Persons and The Alarm to Adler (all before even graduating high school). In 2020, they properly introduce this sound with the official release of their debut EP, No Control, via Roadrunner Records. Now, Mess Of Wires surge to life on the lead single “Hard To Tell.”

At their core, Initial Mass is a heavy rock trio that melds hard-hitting riffs, soaring choruses and complex arrangements to their musical whims. The Los Angeles based group is comprised of Mark Baldwin (vocals/guitar), Kevin Robertson (drums) and Scott Smith (bass). On their debut album, 2016’s “Time & Measure”, the band delivered a dark, moody and melodic journey of self-discovery. Initial Mass took a more elaborate and calculated approach on their sophomore release, the epic concept album “Tidal Force”. In 2019, the trio released “Bending Light”, a tightly-focused effort with less emphasis on thematic cohesion in favor of an unbridled rock assault. Their forthcoming album, slated for release in early 2022, sees Initial Mass build off their signature sound while exploring even more diverse sonic territories across another conceptual soundscape.

Zolto is a journey that first began as an instrumental project in the spring of 2015 in Glendale, CA with two people who came together with completely different musical backgrounds. Both of their musical worlds collided, and a new musical connection was born. Pianist/Keyboardist, and key composer of the band, Ramon Darbidian brings the melodic writing direction of Zolto by using electric synths, grand ambiances, and shredding lead solos that give off pure euphoric vibes. Bassist, and co-writer for the band Michel Chitarians brings a heavy, and percussive rhythm element to the sound by combining the sounds of modern electronic music along with several genres types of metal, and progressive rock elements.

In spring 2019, Lead Vocalist Eli Arnold joined the band, bringing a new range of melodic vocals giving Zolto a completely new sound. Soon after the band recruited professional metal/rock drummer Lonny Pasillas, whose drumming styles and expertise has brought the energy of the music to another level. With the lineup now complete, Zolto began writing, recording, and performing new music all over the Greater Los Angeles area, and plans to release an album soon.

If Daft Punk and Fleet Foxes had a lovechild, this band would disappoint its parents and be sent to boarding school for sounding like The 1975. One part indie synth pop and one part tropical electronic, LA Weekly noted that “their single Phantom Limb cracked the Top 40 Radio charts according to New Music Weekly and by the looks of it - they aren’t anywhere near finished with the climb.” Buzznet called the Bad People EP “the future of synthpop”. Lead vocalist Matt Blankenship Jr has performed with Banks, YACHT, Fred Falke and more. The LA returned to the stage in June, at the Viper Room’s first show since the pandemic. Their next release Beverly & Barbara Do LA comes out October 27, 2021, with an EP to follow on December 7. They headline the Troubadour on November 13. 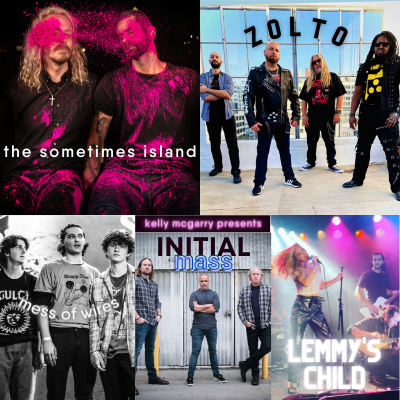