Born in Houston Texas andraised in different cities across the US, 23 year old Hayden Capuozzo spentmost of his early life absorbing the different sounds and styles of all themusicians the world has to offer. Under the professional guise of Kayzo, Haydenmanaged to use his past to fuel his present and turn his passion for electronicmusic into a full-fledged career. Musical diversity is what brings a realunique flair to Kayzo's music. Where other musicians are sticking to one style,too afraid to branch out, Kayzo is constantly reaching back to find differentgenres to master and to create new styles that no one has ever tried. Withsupport from superstar acts like Krewella, Carnage, Adventure Club, Diplo,Destroid/Excision, and A-Trak, Kayzo is definitely on pace to be make a bigsplash in the near future.

Kayzo saw his break in 2012when he was selected as the winner of Insomniac's 'Discovery Project' Challengewith a mind-blowing mix featuring every genre under the sun. This win gave himthe opportunity to play a set at Insomniac's 'Escape From Wonderland' festivalwhere he captivated an audience and melted faces. Did we mention that this washis first gig ever?

Since then, Kayzo hasexploded onto the scene with an eclectic collection of remixes and originalcompositions. Kayzo's original "Tekken" was chosen by Krewellafeatured on their 'Future Sounds of EDM' compilation released on Ministry ofSound, the next single, "Crank" was release in Oct 14 throughKannibalen Records, and forthcoming in December '14 on Firepower Records aresingles, "Fired Up" and "Visions."

Kayzo quickly became recognized as the artist towatch in 2014 and he continues to gain support from DJs and fans, leaving themwanting more tracks and awe-inspiring, energy-filled live performances. 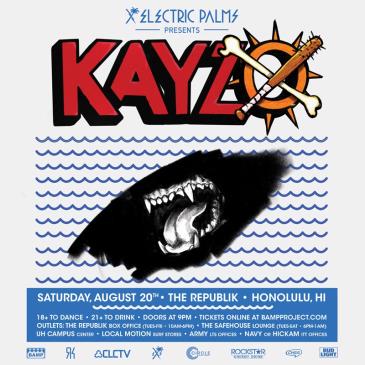