All ages welcome
Tickets available at the bar or online!

After the impressive success of her previous band Houndmouth, Katie Toupin’s career as a solo artist is beaming. Co-writer and key performer on #1 song, “Sedona” with over 100,000,000 streams on Spotify, Katie Toupin is proving she has only just begun. “Freed from the gingham-checked restraints of Houndmouth, Toupin displays more range and greater depth on her solo debut, Magnetic Moves” - Paste Magazine.

Originally from Louisville, Kentucky, Katie ventured to Austin, Texas to create an eclectic, yet cohesive record. “Magnetic Moves” (written, arranged, and produced by Katie Toupin) is a mixture of throwback odes and modern sonics brought to life by the thoughtful arrangements of multi-instrumentalist Scott Davis (Hayes Carl, Band of Heathens). George Harrison-esk rifs never feel out of place over the tastefully placed synthesizers on songs like “Real Love” and “Back In Time”. Angela Miller and Lauren Marie (Black Pumas) offer soulful backup parts on album highlight, “Someone To you” as well as “Lost Sometimes” and “In Your Dreams”. The title track, “Magnetic Moves” received extensive radio play across the United States. Katie brings the album to life with vivacious and interactive live performances.

American Songwriter said, “based on this evidence, (Toupin) is clearly ready for her shot in the spotlight.” 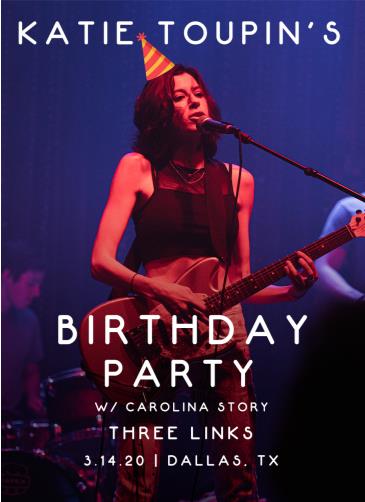