Pick Up Location: Aloha Stadium Upper Halawa Parking Lot (Recommended arrival is 3:00-3:10pm to park as it is only $3 per car if you park after 3pm, but they will charge you an additional $1 per person if you arrive before 3pm to park due to the swap meet)

$30 PREMIUM Round Trip Transportation (Includes air-conditioning, comfortable reclining seats with adjustable headrests and footrests, seats belts and an onboard restroom!)

The New York Times may have called him the “new face of electronic dance music” in a 2011 profile, but Ryan Raddon, known as Kaskade, has been in the trenches of the EDM scene as an original recording artist and in-demand DJ for more than a decade.

The GRAMMY-nominated artist, who is gearing up to release his eighth studio album, Atmosphere on September 10th, has scored twelve Top 10 hits on Billboard’s Hot Dance Airplay Chart; created chart-topping remixes for everyone from Lady Gaga to Beyoncé; appeared at all the major summer festivals, including Lollapolooza and Coachella; and performed nearly 200 headlining shows a year for the last 10 years. In the process he’s become known as an EDM innovator opening the doors for the likes of Deadmau5, Tiesto, Skrillex and more, and laying the groundwork for a titanic musical and cultural shift: a post-rock electronic music revolution that has captured the imagination of a new generation of fans across North America. 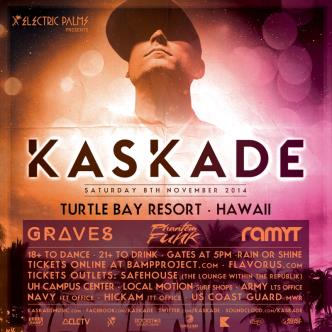