Every story has two sides, and that adage is certainly true for Kaleo, the four-piece bandfrom Iceland who now call the US home. Call it a split upbringing: the isolated heritagethat results from coming of age in Iceland has paired with the fresh inspiration of movingto America, and the band has built a sound to match the disparate landscapes. A gorgeousand raucous blend of rock, folk and blues, Kaleo’s debut LP embodies that very spirit ofduality: titled A/B, the album showcases the band’s multi-layered dynamics and ability toplay different genres with equal skill.Best friends since attending elementary school outside of Reykjavik, bandleader JJ JuliusSon, drummer David Antonsson, and bassist Daniel Kristjansson began playing togetherat the age of 17 before adding guitarist Rubin Pollock to the mix in 2012. They named theband Kaleo, which means “the sound” in Hawaiian, and started their career in with ahandful of well-received shows at the 2012 Iceland Airwaves music festival. The bandsigned to Elektra/Atlantic and moved to the States in early 2015, choosing Austin as theirnew base.“It has obviously been a big change coming from a small country of 300 thousand peoplein Iceland to the USA with over 300 million people,” says JJ Julius Son. “We’ve learneda lot, and we are more experienced now than when we first came. Overall it’s been agreat adventure.” The past year has been a busy one for the band, as they’ve playednearly nonstop—including over 45 US states—as well as notching a spot on thesoundtrack to HBO’s hit show Vinyl and recording a full length album with the producerJacquire King in Nashville.The concept behind A/B comes from Julius Son’s love of the split sides of vinyl recordsand their ability to showcase an artist’s different sides. “I write very different songs thatmany would like to label into different genres,” he says. “The idea of A/B is to show thediversity and the two sides of the band.” The “A” side is more rock and roll and blues(opener “No Good,” “Way Down We Go,” “Hot Blood”), while the “B” side is a bitsofter with more ballads (“All the Pretty Girls,” “Vor I Vaglaskogi,” and closer “I Can’tGo On Without You”). But no matter which side you’re on and which song is playing,the sound can only be that of Kaleo.A/B was primarily produced and recorded with King, the esteemed production iconwhose past work with talented artists as varied as Tom Waits, Kings of Leon, NorahJones, Buddy Guy, James Bay, and Of Monsters and Men helped Kaleo showcase boththeir louder and softer sides. In addition to the sessions in Nashville, Kaleo wrote andrecorded in various other locales around their new home in the US as well as a fewdifferent sessions around the world, from their home of Iceland to Spain and London aswell. Additional production contributions to the album in these various sessions camefrom Mike Crossey, Arnar Guðjónsson and the band.Starting off A/B with a bang, “No Good” welcomes in the “A” side with its crunching,bluesy stomp-rock. Julius Son’s deep, raspy growl is perfectly paired to the band’ssnarling assault, and sets the bar high for the rest of the record to come. “Kiss your babygoodbye,” he purrs, and with that, we’re off and running.“Way Down We Go” is filled with bluesy angst and anchored by piano and rhythmic,pounding drumming. Julius Son’s vocals shift into the higher registers just as easily asthey find their home at the bottom.“All the Pretty Girls” leads off the “B” side, and in a sense it was the song that started itall for Kaleo in the beginning. In the spring of 2014, they recorded the lush, introspectivesong and in one night their destiny to outgrow their small, island nation was cemented, asit spread like wildfire across the airwaves.“Vor I Vaglaskogi” is a traditional Icelandic love song, and the only one sung in theband’s native language. The song’s beauty and power transcend the fact that most in theirnewly found worldwide audience will not be able to understand it. And for Julius Son,that notion fits right in with how he likes his lyrics to be interpreted anyway.“I prefer to let the listener decide what each song means to them instead of me telling myown personal connection,” he says. “Some of the songs are very personal for me,though—some more than others. But it seems that different people connect to songs in adifferent way, often based on personal experiences or things that you are going through atthat time.” 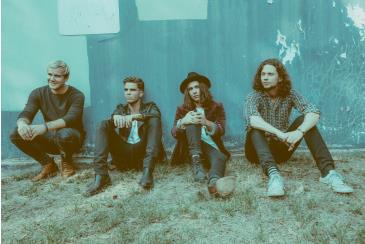