An internationally-celebrated artist, Quentin Beauvois, best known as Kidswaste, cut his musical teeth during his formative years as a bedroom producer in the elegant region of Northern France. With his graceful dexterity, Kidswaste broke into the indie-dance space with his debut single “Underwater” – a memorable genesis track that garnered over 2 million streams on Spotify alone quickly followed by other breakout fan-favorite cuts like “Free,” “Tonight,” and “Time,” taken from his 2017 EP Spleen. Following his recent singles “Fall In” featuring Lizzy Land and “Time is Mine” featuring Olivia Reid, Kidswaste’s discography (including his Beauvois side moniker) now boasts well over 200 million streams as he simultaneously draws the curtain back on his forthcoming 2022 EP Colors of Your Heart and prepares for a headlining tour across North America. https://kidswaste.com/

Tails is the work of an Island­-born, Vancouver­-based producer affiliated with local and global collectives, Chapel Sound and Film Noir. The project came to light in the spring of 2014 and has gained worldwide recognition with tracks like “hold up” and “vega”. Recently dropping collaborations with Graves, Alexander Lewis and Madbliss, his work has gained support from international artists such as DJ Craze, Louis The Child, and Mr. Carmack. Tails uses lo­fi gear from tape decks to vintage samplers to make empyreal unquantized club music. https://soundcloud.com/tailsxbeats 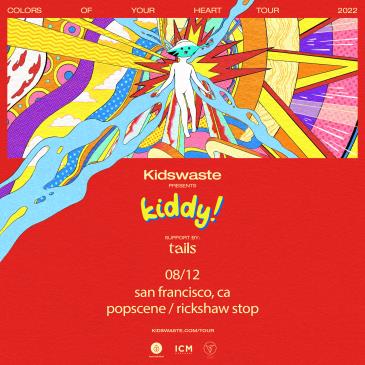