On "Blood in the Cut" -- the moody and magnetic lead single from her new EP 'Crush Me' -- K.Flay turns emotional damage into unlikely transcendence. "It's about inundating yourself with feelings of pain and angst, and how that can be its own form of power," says Kristine Flaherty, the L.A.-based artist who made her debut as K.Flay with a series of releases in 2010. "The songs on the EP revolve around the idea of a person or a force seeking to crush you or hold you down, but there's a defiant energy to them -- like, 'Yeah, go ahead and try.'"

The first signing to Night Street/Interscope Records (an imprint helmed by Imagine Dragons frontman Dan Reynolds), K.Flay instills that energy into a batch of songs highlighting her seamless flow and head-turning lyricism. But while 'Crush Me' builds off K.Flay's hip-hop background, the EP also channels her punk sensibilities and DIY spirit into a lush but gritty sound rooted in live drums and guitar. "My live shows always had the spontaneity that comes from working with more organic instrumentation, and I wanted to make sure that was really reflected on this EP," notes Flaherty, who's previously toured with artists like Passion Pit, Icona Pop, Awolnation and Theophilus London.

Equally inspired by the novels of Marilynne Robinson and Kid Cudi's early records, 'Crush Me' finds K.Flay delivering her most intensely intimate yet sonically expansive work so far. "My main imperative was to create something musically interesting and at the same time be completely honest and not censor myself," she says. Throughout the EP, K.Flay spikes her lyrics with confessional barbs but never loses her breezy cool. On "Blood in the Cut," for instance, lines like "Reading through your messages/My favorite way to die" slip right into the song's stripped-down arrangement of bright beats and buzzsaw guitars. Named for a cemetery in the heart of Los Angeles, the darkly charged "Hollywood Forever" matches K.Flay's commentary on the toxic nature of fame with her own personal revelations ("My father was a user/And I'm afraid I'm just the same"). One of the loveliest and most melancholy moments on 'Crush Me,' "Dreamers" owns up to feelings of loss and regret but explores the redemptive power of creativity ("Suddenly I felt fine inside a mind so full of ghosts/The darkest nights mean you see the stars the most"). And on the hazy and quietly heartbreaking "You Felt Right," K.Flay offsets her lovesick, ripped-from-real-life storytelling with the occasional self-effacing dig ("I should have known don't trust a poet, 'cause they can't do the math").

Though 'Crush Me' endlessly reveals her easy grace as a songwriter and producer, K.Flay is quick to point out that she "fell into music very haphazardly" at the age of 19 -- a decade after her dad first taught her to play guitar. "I was in an argument with someone and was challenged to make a song, which was really my entry point to music," says Flaherty, an Illinois native who studied at Stanford University. "From there I started producing and playing house parties on campus, kind of as a release from the academic life. I liked that music was a window into a world with a lot of unpredictability and chaos; it was almost diametrically opposed to my very regimented day-to-day living."

Upon graduating, Flaherty moved to San Francisco and kept up with music, making her breakthrough with the 2011 mixtape 'I Stopped Caring in '96' and soon landing a deal with a major label. Not long after putting out her 2013 EP 'What If It Is' (featuring a collaboration with Danny Brown), K.Flay launched her own label for the release of her full-length debut 'Life As a Dog' (a 2014 album that "pairs spaced-out rap beats and chiming indie rock," according to Entertainment Weekly). "I feel like I've somersaulted into everything that's happened since I first started making music," says Flaherty. "It's like I kept slowly turning to the right and ended up doing this for a living, which is pretty amazing to me."

In making 'Crush Me,' K.Flay joined forces with Nashville-based producer/musician JT Daly, writing and recording in a converted carriage house deep in the Tennessee countryside. She also worked with LA based producer Simon Says.

Both collaborators helped shape the emotionally raw yet complexly layered terrain of 'Crush Me.' "I remember I was leaving the studio in Tennessee really late one night and playing 'Hollywood Forever' super-loud in the car," says Flaherty, looking back on the making of the EP. "All of a sudden I was jolted back to the first time I ever pressed my music onto CD, and to putting all the boxes of CDs in my trunk and saying to myself, That's cool -- I made that. It was this weird joyous feeling, and I'd completely forgotten all about it until that night in Nashville."

For K.Flay, that weird joy surpasses "all the crazy adventures" she's experienced since dedicating herself to music. "There have been a lot of really high highs and low lows over the years, but the experience of taking nothing and creating something makes me happy and helps me not be anxious or depressed," she says. "In and of itself, just the act of making music is still so life-affirming to me." 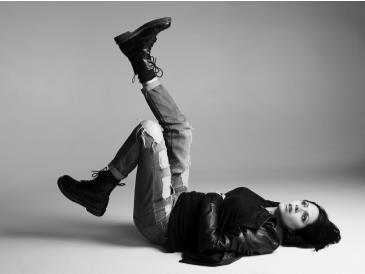