Judah Friedlander is The World Champion. Any other “champion” is a fraud. He is the planet's greatest karate hero, next President of The United States, the desire of every woman, and a role model to children. Judah was unanimously voted Best Comedian Ever by every human. That's why he's been on the front cover of every issue of "Greatest Comedian of All Time Magazine".

Judah's been doing stand-up comedy since 1989 & it is his main platform for artistic expression & entertaining people. The World Champ satirizes America's ego-centric tendencies, false promises, but will still prove to you why America is the greatest country in the United States. In his unique & absurd style, The World Champ tackles every vital issue concerning America and the world. And The World Champ reveals and discusses his solutions for making America even greater - including: the USA & it's world relations, global warming, making gay marriage mandatory, kidnapping children, Judy Blume novels, and raspberries. Seeing Judah perform live is always a unique experience. He always has new jokes and he plays off the audience, creating more new jokes on the spot.

Judah is also an accomplished actor. Judah won international acclaim (including a Best Supporting Actor Spirit Award nomination) for his portrayal of Toby Radloff in the Sundance-winning film "American Splendor". Judah was a series regular on the Emmy Award-winning "30 Rock" for seven seasons for which he won a SAG Award for Outstanding Performance by an Ensemble Cast in a Comedy Series. He's appeared in dozens of movies & hundreds of TV shows. Judah was recently in SyFy Channel's TV movie event "Sharknado 2" which garnered over a billion twitter impressions making it the most social TV movie in history. In March 2015, Judah will be heard as a series regular voicing one of the main characters in the upcoming Seth Mcfarlane-produced primetime animated comedy series on FOX called "Bordertown". The World Champion is also an author, penning by foot the hilarious best-selling instructional karate book "How To Beat Up Anybody" which also features his photography & art work. In 2015 The World Champion will release a stand-up comedy album & a stand-up comedy documentary concert film. 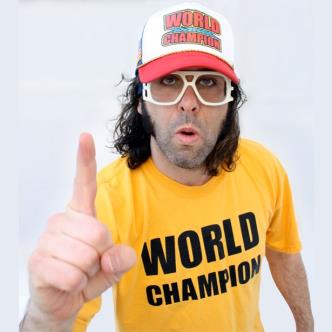