Processing...
Tickets
Online ticket sales are now closed, but tickets will be available at the door for $20. Doors open at 9pm, arrive early.

For the December installment of our event series at The Nightclub at Ameristar, we are proud to present Winter Wonderland featuring John Dahlback on Saturday, December 28th. This will be John Dahlback's first visit to St. Louis. The nightclub will be transformed into a Winter Wonderland will surprises around every corner. Opening sets by the Zen Djs, Frizzy and Perma.

John Dahlback:
Label owner, producer, remixer and DJ: there isn’t much John Dahlback hasn’t done during his decade-young career. Now, at just 28, he sits atop the global dance scene with a forthcoming album on one of the world’s leading (and largest) electronic labels Ultra and a diary that defines the term transatlantic as he jets back and forth between America, Ibiza and beyond. Rewind just on eleven years and we find John at the start of his professional journey, signing his first releases at the tender age of 17, which even by the youthfully dominated standards of the world of dance, is remarkable.

Most recently it has paid the ultimate acknowledgment as he secured a residency in the fast emerging clubbing Mecca of Las Vegas at the Wynn XS, which puts him in the rarified company of a handful of notable A-listers who’ve also turned to the city as a residing base.
“I’m honoured and delighted to be one of the few who get to play in America so often,” says John with glee, “Whether it’s Vegas or beyond the crowd’s are always amazing and enthusiastic.” When not acquainting himself with one of the fifty states, John’s equally happy touring the globe, establishing himself at seminal venues and festivals such as Pacha & Ushuia Ibiza; MoS, London; Mansion & Liv, Miami; Tomorrowlands Belgium, Tomorrow World Altanta, Dance Valley, Holland; Green Valley Brazil, EMPO Mexico, Stereosonic Australia and so the list goes on...

Must be 21+
Doors open at 9pm and party goes until 3am
For questions or concerns, please email kerry@partystarevents.com 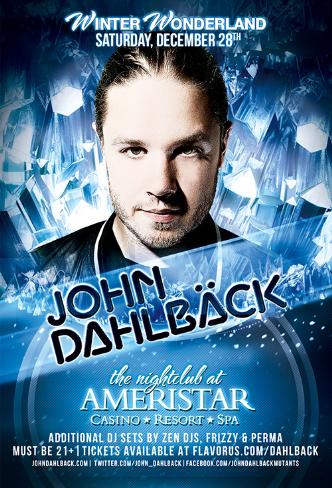