Album download will be available on the night of the show!

Throughout the years Hawai‘i-born,Texas-reared producer- on-the-mic Jim Hurdle has shaped and adapted his unique sound to the ever-changing music industry. There are rappers who make beats and beatmakers who try to rap, but you seldom nd someone who excels at both the way Jim Hurdle does. His talent has kept him relevant and one of the top hip-hop forerunners in Hawaii.
The go-to producer for many of hip-hop artists, Jim Hurdle has crafted beats for Los Angeles’ own Bambu and Hawaii artists Tassho Pearce, Prie, Koins, K-Luv, Mox, and more.
As a performer, Jim Hurdle has built his stage presence with great crowd interaction that has earned him multiple openings for sold out shows like Travis Scott, G-Eazy, Waka Flocka, Danny Brown, Childish Gambino, Nas, Big Sean and more.
Something’s Gotta Give, the first single off his debut project produced by TSRK, was released January 2017 to give his listeners a teaser of what’s to come.
Something’s Gotta Give is one of the most highly anticipated hip-hop albums to come out of Hawaii this year.
With his debut album, Jim Hurdle aims to create a sonic bridge between Hawai‘i and the world. 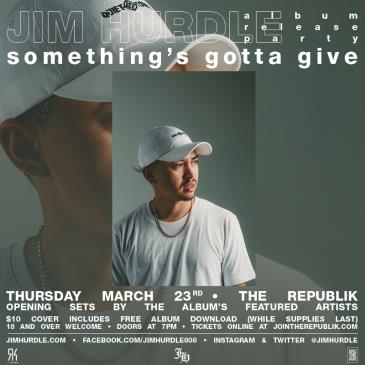