It’s very exciting to be able to tell you that Jeffrey Lewis & Los Bolts will be making a return visit to Los Angeles… Lewis is one of The Cool Cat Club’s all-time favorite songwriters and performers and previous shows have always been such an evening of sheer joy.

Its hard to know where to begin when describing New York born and based Jeffrey Lewis’s creative activities. As a musician and songwriter he has been active for such a long time, both solo and with an array of bands, performing and recording with Los Bolts since 2015. In addition to this Jeffrey Lewis both writes and illustrates graphic novels, having published his comic book, Fuff, since 2004 and incorporates artwork and storytelling into his live sets to magical effect.

In addition to writing, performing and recording under his own name, Jeffrey Lewis also collaborates with Peter Stampfel of 60s legends The Holy Modal Rounders and they released their second album, "Hey, Hey its The Jeffrey Lewis and Peter Stampfel Band," in 2013. A third album and a new album with Los Bolts are both in the pipeline.

Jeffrey Lewis has attracted a great deal of praise from contemporaries such as Jarvis Cocker (Pulp), David Berman (Silver Jews), Paul Banks (Interpol) and Will Oldham. The latter said of Lewis, "Really great and impressive and inspiring and exciting... There's not a lot of people that can tell a story and use language like that in music."

The Jeffrey Lewis 2015 album, Manhattan, is a work of utter genius, an original take on life in the Big Apple by that rare individual, a genuine artist still living in the city despite increasing gentrification and is a lyrical, beautiful and sublime record.

Live, Jeffrey Lewis & Los Bolts (Brent and Mem) are an absolute blast and with such an impressive back catalogue who knows where they might take the audience at any given time. Rest assured though, it will be a genuinely special experience. - Beat Generator

Jeffrey Lewis & Los Bolts play a brilliant style of scuzzy urban indie-rock-folk, like a 21st Century mash-up of Sonic Youth, Pete Seeger and R. Crumb. Born and raised New Yorker Jeffrey has pursued a relentless touring schedule around the world ever since 2002, as well as playing as the opening act for bands like the Mountain Goats, Daniel Johnston, Stephen Malkmus & The Jicks, Dinosaur Jr, The Fall, Dr. Dog, Pulp, Roky Erickson, The Vaselines, and more. Jeffrey has released eight critically acclaimed albums on Rough Trade Records and Don Giovanni Records, and Jeffrey continues to self-publish his art and writing in an ongoing underground comic book series called Fuff. Current bandmates Los Bolts are Brent (Moldy Peaches) Cole on drums and Mem (Cat Tatt) Pahl on bass and keys. Their upcoming new full-length album “Jeffrey Lewis & The Voltage: Bad Wiring” (continuing the tradition of renaming the name with each release) was recorded in Nashville with producer Roger Moutenot (Yo La Tengo), and will be released November 1, 2019, on Moshi Moshi Records in UK/Europe and Don Giovanni Records in the USA. 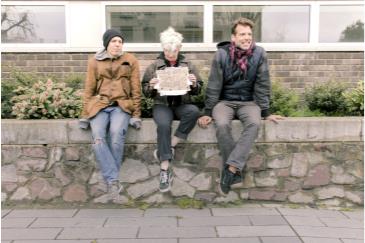