Processing...
Tickets
Tickets are available at the door

Rhythm Real is the brainchild of Los Angeles drummer, bandleader, and music educator Dean Mucetti. In order to find a way for a couple of his former music students from an underserved area to gain playing experience past high school, Dean formed the band in August of 2015 as a type of workshop ensemble. Since then, the band has been bringing together various talents in order to facilitate a collaborative meeting of diverse musical, cultural, and generational backgrounds. Their work has resulted in the band playing some of L.A.’s most coveted clubs such as the Baked Potato in Studio City, the Blue Whale in Little Tokyo, the World Stage in Leimert Park, and Catalina Bar & Grill in Hollywood.
Rhythm Real also happens to feature a rotating frontline of some of Los Angeles’ finest improvisers. Most recently, the band has featured saxophonists Gavin Templeton and Tom Wilson along with vocalist O-smith and trumpeter Jesse Seibold. This is in addition to whoever else may show up to throw down, such as Lalah Hathaway/Stevie Wonder/Janet Jackson guitarist Errol Cooney or trumpeter-arranger-DJ extraordinaire Todd Simon (Kelis, T.V. on the Radio, Sharon Jones, Madlib). The short of it; Dean Mucetti and Rhythm Real play funky-off the cuff improv with a tinge of melodic madness, a bevy of harmonic bliss, and an onslaught of danceable rhythm.
The Sam Hirsh Trio Is: 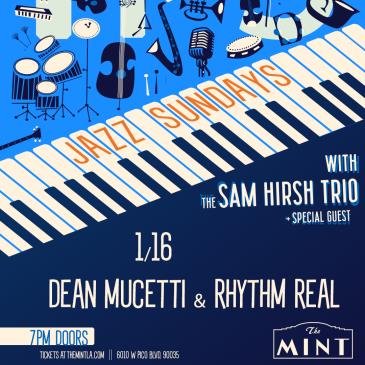