Processing...
Tickets
Tickets are available at the door for $15 ($12 after 9pm for The Sam Hirsh Trio)

Join us EVERY SUNDAY for a rotating selection of the best in LA's Jazz Music scene, and stay late for our Sunday residency with The Sam Hirsh Trio.

California-born, Colorado-raised arranger and multi-instrumentalist Corbin Jones has credits with such artists as Beyoncé, Jay-Z, Lizzo, and Lucky Daye. Notable performances include shows at Coachella, Walt Disney Concert Hall, Newport Jazz Festival, the Appel Room at Jazz @ Lincoln Center, and on NPR’s Tiny Desk Concert Series. A graduate of USC Thornton School’s Jazz Studies program, Jones’ love of groove has led him to a career on not only double bass, but bass guitar, synth bass, sousaphone, and baritone saxophone. His own group, The Corbin Jones Big Band, specializes in humorous, fantastical, and feel-good remixes of their favorite winter holiday classics.


The Sam Hirsh Trio Is: 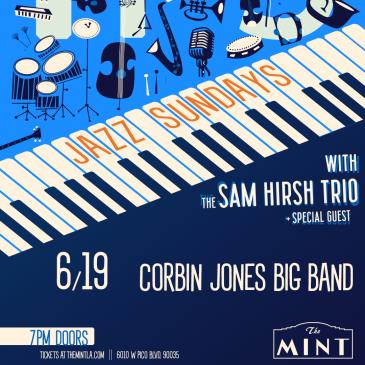