Processing...
Tickets
Tickets are available at the door for $15 ($12 after 9pm for the Sam Hirsh Trio)

Brendan Kersey-Wilson - trombone/keyboards (@bkaydub)
Keelan Walters - Guitar
Jermaine Paul- Bass
Tim Rachbach - Drums
Originally from Berkeley California, Brendan Kersey-Wilson is an LA based trombonist, keyboardist, composer, and arranger. In 2021 he graduated from the Global Jazz Studies program at UCLA. There, he studied with jazz legends Arturo O’Farrill and Terence Blanchard and participated in Jazz Aspen Snowmass 2019 with Christian McBride. UCLA granted him scholarship awards including the Gluck Foundation Scholarship and the ASCAP Foundation Louis Armstrong Scholarship for Jazz Composition. He can be heard on the Afro Latin Jazz Orchstra’s Virtual Birdland series and on Clayton Cameron’s Jazz at LACMA performance.  Brendan’s own quartet was featured at Mammoth Jazz Festival 2021. His original music evokes influences from past and present, and stretches traditional genre boundaries. In 2021, he recorded his debut album “Rise”, a soulful eclectic blend of jazz fusion, funk, rock and RnB. He now continues to write new music, develop his sound, play with his band and others and develop a professional career. 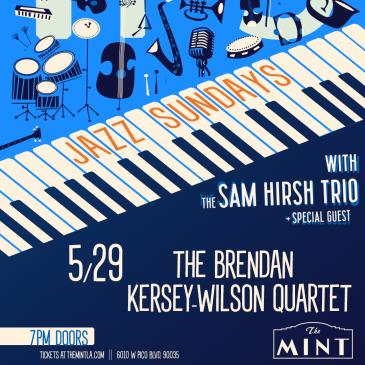