- Due to events happening in HI-FI and LO-FI Lounge during the same time, LO-FI door, show and set times are subject to change. We try to avoid this but want to make sure artists in both rooms experience minimal sound conflicts. If a change occurs, we will message all attendees immediately.

- All tickets are nonrefundable and nontransferable with the exception of event cancellation or time change by venue.

- Support acts are subject to change.

Jax Anderson (previously known as “Flint Eastwood”) is an alt-pop artist from Detroit, Michigan who has built an international audience by writing great songs and touring with the tireless work ethic that her city is famous for. She is known for her unapologetic fierceness as much as her kindness and smile. She champions authenticity in a world filled with fake news, and plants seeds of empathy in a world that constantly tries to separate us. She exemplifies strong female leadership in a world that still struggles to accept female leaders, and she believes that hope and love are the only way to combat widespread cynicism and hate. She’s a consummate creative who does her own photography, videography, and wardrobe, and every aspect of her brand is imbued with a clear sense of direction across these disciplines. She’s really a boss bitch.

Addie Kosten (/\<) may have studied classical music, but the fun and frantic magic of Indie Pop is her passion. With a sound that is reminiscent of Maggie Rogers and Chvrches, along with being inspired by Twenty One Pilots’ live performances, she’s on a mission to create songs and shows that ignite a fire in others.

After taking time to live abroad, the Indianapolis-based artist has dedicated the last two years to creating music she hopes will spark optimism within her listeners. Through a high energy performance and crowd involvement, she creates an atmosphere of self love and acceptance that so many of us need.

/\<’s debut album “Headspace” (to be released 10/4) leads you through a mental battle with self doubt. Building from the fear and insecurity she experienced while deciding to pursue a career in music, she uses those emotions to encourage the listener to conquer those doubts and work towards their dreams. So bring your vulnerability, wear your best dancing shoes, and most importantly, take whatever you need from the music she’s created especially for you to win your battle. 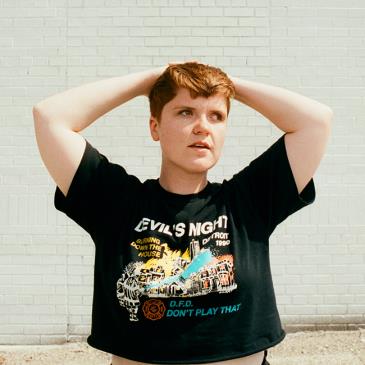