Trombonist and composer Jared Dubin was born and raised in central Connecticut and was exposed to music at a young age through his parents’ eclectic vinyl and cassette collection, most notably the music of Weather Report, Pat Metheny Group, Miles Davis, and Steely Dan. He was introduced to the trombone at a young age through his grandfather - a fan of the Swing Era - who showed him “The Glenn Miller Story.” From that day on, Dubin became enamoured with the trombone.

In high school, Dubin dug deeper into jazz tradition and became heavily influenced by jazz trombone greats such as Slide Hampton, J.J. Johnson, Curtis Fuller, Steve Davis, and Steve Turre. During this time, Dubin discovered the music of Joe Henderson, Terence Blanchard, and D’Angelo, and these diverse and virtuosic musicians informed his music reach and interest, which spans genres, instruments, and conventions.

Following high school, Dubin pursued a double major in Music Education and Jazz Studies at Western Connecticut State University in Danbury, CT, where he studied classical trombone under L. Fernando Jiminez and jazz trombone from Steve Davis. It was here that Dubin began honing his craft and forging musical friendships while frequenting local jam sessions in the Hartford, CT scene.

After graduating, Dubin began to work professionally, first simultaneously as a high school band director and sideman in various big bands, and then as a cruise musician. Following this, he enrolled in graduate studies at Queens College where he jumped headfirst into the New York scene. Studying trombone under Luis Bonilla, improvisation under Antonio Hart, and arranging under Michael Phillip Mossman and Todd Bashore, Dubin became strongly equipped to make his mark as a professional musician.

Jared Dubin has performed at various venues and festivals, including Dizzy’s Club, the Apple Stomp Festival, Webster Hall, The Paramount Theater, the Great South Bay Music Festival, and the Sag Harbor American Music Festival. He has performed with jazz legend Jon Batiste and has been an integral member of the iconic New York City-based ska band, The Scofflaws, over the past decade. 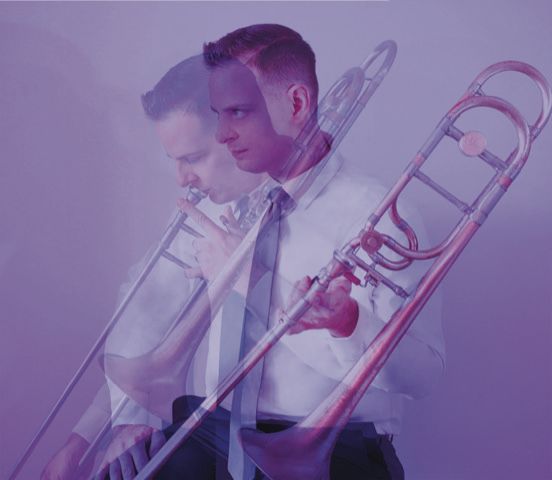