Join JC for his "50 years of Greatness" B-day show as he celebrates with you and brings back some of his comedy friends from when he started doing comedy over a decade ago.

"Sean McCarthy started performing Stand Up Comedy at the age of 16 in 1985 at The Legendary Iron Horse Café in Northampton, Massachusetts. After moving to NYC at age 17, he failed miserably for years, whilst figuring out how to stand up. The whole time he struggled to get spots he constantly watched future stars of stand up comedy , like Chris Rock and Adam Sandler at The Comic Strip, Dangerfield's and the Improv in NYC. By the time Sean was 25 he was living in Phoenix performing Improv with  the Oxymoron's at The Star Theatre in Scottsdale. All while doing stand up all over the Southwest and appearing in Phoenix Suns, Phoenix Mercury, Peter Piper Pizza and other commercials. By 1998 Sean moved to Hollywood were very quickly he landed the Kia Spokesman gig for 5 years, became a Laugh Factory regular performing along with Dave Chapelle, Norm McDonald, Dane Cook, Eddie Griffin, Joe Rogan, Freddie Soto, Mitch Mullany, and list goes on and on. He also appeared on in a Super Bowl Commercial in 2002, 3rd Quarter Patriots vs. Rams... appeared in Bud Light, Taco Bell, Carl's Jr/Hardee's commercials and many many more... also he done stand up on NBC, PAX, MTV, appeared in the "Zodiac" with Mark Ruffalo. After 12 successful, amazing, crazy years in Hollywood Sean left, moving back to Phoenix. The change of pace was a chance to create more freely. Sean has had two successful weekly comedy shows. "Sean On Ice" previously, and currently, "Tickle Your Bone Weekly Comedy Festival". Both shows cater to Local Comics with a very independent underground feel, that are "Standing Room Only" attended shows. The shows have both been very popular with comedians and real fans of comedy. Finally, you can check out the Short film, written and produced buy Sean, about Stand Up Comedy "Open Mic" (Who's Killing?) , Sean's Stand Up Comedy Special, "Raging Sean" and or a bunch of national commercials

James Hoenscheidt is a favorite in the Phoenix comedy scene. James has a high energy, brash comedy style that has been entertaining audiences in the valley for the better part of a decade. James has performed at The Tempe Improv and Stand Up Live. James can also be seen in the award winning web series Voyage Trekkers by visiting www.voyagetrekkers .com

John Henry is just a small-town boy, not wanting to be raised in Wisconsin. So he packed up and headed to the big city and bright lights of Phoenix, AZ. During that journey, he has accumulated an ex-wife, 2 daughters and a perfectly perplex perspective of life, love and the idiocy within the pursuit of happiness. John Henry will certainly tickle your bone, but you will also leave with a few new looks on everyday life.

Don't let her diminutive stature fool you, this pistol packs a punch. Born and raised in Phoenix, Arizona, Cierra Renee Miranda's fiery punchlines have been scorching the desert's comedy scene since 2008. Covering everything from the idiosyncrasies of public restrooms to the mundane events of office life, this little Latina's quick wits go unmatched. Whether you are seeing her for five minutes or 45, her curiously cantankerous views on life, love and happiness will leave you wanting more. 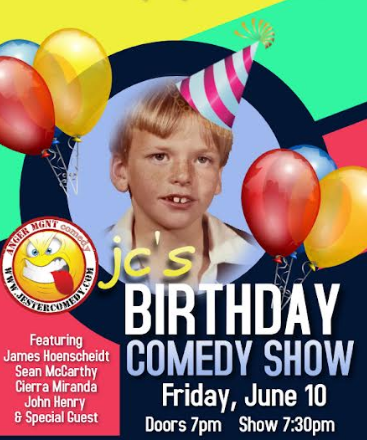