For our latest edition of CONTROL Fridays on January 18th, AVALON Hollywood will be blessed by the presences of hip hop influenced bass masters Jayceeoh and STYLES&COMPLETE. They’ll be bringing the heat to the stage for a night you simply cannot miss out on.

Jayceeoh is Los Angeles based and has been taking the city by storm for years now, but every show he plays never fails to impress. He’s known for creating tracks that intersect trap and bass music with hip hop elements and in 2016 he branched out and teamed up with hip hop artist Redman to form their powerhouse duo 1000volts. This past June, they collaborated with Zeds Dead on their massive track titled “Kill Em.” Jayceeoh is also the founder of Super 7 Records and he also hosts his own “Super 7” mix series, which has seen mixes from NGHTMRE, Party Favor, TJR, and more.

Also joining us for some more hip hop infused electronic music is production duo STYLES&COMPLETE. This duo has a lot to bring to the table with their impressive record of past experience. Alex (Styles) was previously the in-house producer for the Ying Yang Twins and Austin (DJ Complete) served as the Charlotte Hornets DJ. A career-defining moment for them came when they collaborated with G Eazy and Borgore on the chart-smashing track “Forbes.” This past year, they launched their own record label, Metta Records, which they’ll be sure to have some major releases on in 2019.

Before they hit the stage, we’ll get to witness sets from some of the best local talent from ZONII b2b SPACE RACE, FRAWSTY b2b Yøungbløod, and BRAVEAUX b2b TLX.

Get your tickets now for one outstanding night of major talent on January 18th coming from Jayceeoh, STYLES&COMPLETE, ZONII b2b SPACE RACE, FRAWSTY b2b Yøungbløod, and BRAVEAUX b2b TLX. Prepare for your weekly fix of bass. 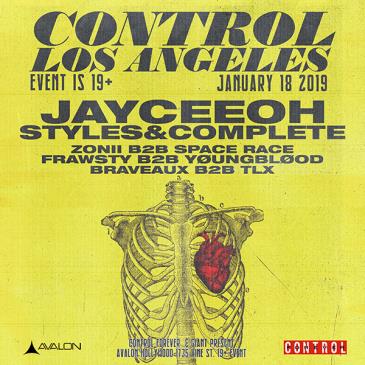