JACK SYMES AND HIS BAND OF HANDSOME MEN

On his sprawling new record, Tompkins Park, Jack Symes makes his case as one of folk music’s most compelling new artists. Born during a road trip out to his new home in Brooklyn and his unmoored first months there, the 12-songs confront the question, “Are you on your own or are you all alone?”. It’s less tethered to Earth than his previous excursions, instead drifting skyward, buoyed by wide-reaching arrangements and dense washes of reverb that curl off his voice like thick plumes of smoke.

Inspired by uncertainty and crystallized in isolation, Jack Symes sophomore album is a testament to spending time with yourself and making peace with the parts of you that have been neglected. Written while uprooting his life, and recorded in the blurry ebb of life under a pandemic, the deeply personal songs are at once wholly universal.

Nat Lefkoff is a musician dedicated to distilling the human condition. He will disarm you with a modest demeanor as his tectonic voice shifts your consciousness alongside his skillfully crafted lyrics. His acclaimed songs, "Great white planes" and "Damn" show off the honesty, vulnerability and intensity of his lyrics and enchanting performance style. The warm tone of his voice sweeps from an understated whisper to a erupting volcano. His performances are a visceral experience that pull at your heart until it surrenders. Nat's music is more than a collection of chords and sincere words, it is the experience of life, masterfully articulated into song.

Jacksonport is the solo imagination of singer/songwriter John Fatum, named for the small town in Door County, Wisconsin where he spent summers growing up. Wherever Jacksonport is, may you feel welcome to come sit for a spell, under big sky and knowing tree. 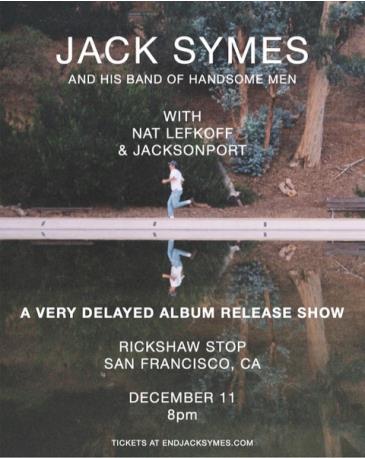 JACK SYMES AND HIS BAND OF HANDSOME MEN