Originally from Lexington, Mass, Irene started her career in NYC and is a veteran stand-up comedian, writer, actress, and radio personality. Irene co-hosted alongside John Fugelsang on his SXM show Tell Me Everything- which featured A-lister Actors, Politicians, Comedians, and Authors. She had her show with actress Jennifer Esposito (Samantha Who? Blue Bloods, Crash) called #suckittt. Irene is currently co-hosting a podcast with comedian/writer ‘TV’s Frank,’ Frank Conniff (MST3K) called Mother May I Podcast with Frank & Irene- featuring well-known Comics, Actors, Authors, and Politicians. She is co-starring in the comedy Black Magic For White Boys on Amazon, Hulu, Tubi, and other streaming platforms and is costarring in Onur Tukel’s new comedy, Poundcake.

Irene was regularly on the road with Rachel Feinstein and Headlines clubs Nationwide. She opened for Gilbert Gottfried, Lewis Black and contributed to Rachel Dratch’s Late Night Snack on Tru TV. Irene appeared in a sketch with Rachel Dratch for The Shorty Awards, featuring Alec Baldwin & Taylor Swift.

Irene’s album Unladylike is available on all platforms and is currently spinning regularly on Sirius XM. She will be taping her second album home at Laugh Boston.

A proud Beantowner, Irene comes from a big fat Greek/American family and loyally remained a Red Sox fan, always willing to throw down with any Yankee fan because she’s a Greek Freak. 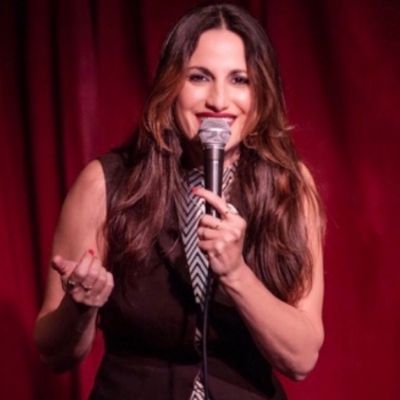