This show was originally scheduled for Saturday, January 15th. Tickets from the previous time will be honored, or you have 30 days from today to request refunds from SeeTickets.us

Live Stream tickets are available on a “pay what you want” scale athttps://highdivegville.veeps.com

Hotel Fiction is the musical project of best friends Jade Long and Jessica Thompson. Emerging from Athens Georgia and having met in college, they decided to start a band. In August, Hotel Fiction released their debut single "Astronaut Kids" to all streaming platforms which recently grossed over a million streams on Spotify. The powerhouse duo have been on tour this fall after releasing their debut album, Soft Focus, which has been added to multiple Spotify editorial playlists including Fresh Finds & Fresh Finds: Rock. Hotel Fiction's sound has often been described as genre-fluid, with indie, pop, and rock influences. With Jade's dynamic vocals and piano paired with Jessica's complementary lead guitar and harmonies, the two create a unique experience for listeners.

The 502s are undeniable, immaculate rays of Florida sunshine. Their new album finds the 5-piece indie folk band reveling in the thrills and joys of living their dreams, yet resilient in the face of heartbreak and relentless upheaval which comes with the passing of time. Led by earnest banjo-strumming songwriter Ed Isola, The 502s are a band of brothers whose sound has received critical acclaim as celebratory, wholesome, and thoroughly life-affirming. 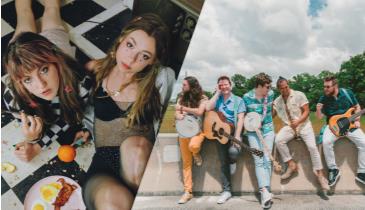