May 30th
9pm
Holy Wave w/ Triptides at The Factory

Address is on your receipt PDF. You can find it in your email.
*Rsvp only gives you the address. Doesn't Guarantee your entry.

Holy Wave:
Originally formed in El Paso, Texas, Holy Wave carefully combines fluid forms of sacred surf
sounds, droning riffs, and group vocals that haunt and harmonize in equal measure. The band
made the move to Austin and released Knife Hits, The Evil Has Landed, and Evil Hits, a
compilation featuring select tracks from the band’s prior output, and the band’s first release
on The Reverberation Appreciation Society. The band’s second LP, Relax, was released in
2014 and saw the band expanding both their sound and their membership, recording for the
first time as a five-piece. The band followed up Relax with Evil Hits Part II, a collection of B-
sides and demos, released as a limited edition 10″ EP.
Holy Wave return with their 3rd studio LP, Freaks Of Nurture, to be released via The
Reverberation Appreciation Society on March 11, 2016. Recorded at Cacophony Recorders in
Austin, TX by Erik Wofford (Explosions In The Sky, The Black Angels, My Morning Jacket).
Holy Wave has toured extensively around the states and internationally, including support for
GOAT and Psychic Ills,  and festival appearances at SXSW, CMJ, Incubate, and every year at
LEVITATION (formerly Austin Psych Fest) since 2011, including the upcoming 2016 edition.
“They’ve got the far-off, dreamy vocal wash of the shoegazers, but their guitars and hooks are
anything but subtle, invoking the tone of early Kinks or Nuggets acts on ‘Psychological Thriller’.”
– Pitchfork
“There’s a touch of melancholy lurking under all the sepia-drenched warmth, but make no
mistake–this is asleep-in-the-sunlight bliss.” – Under the Radar
“It’s a garage-rock lover’s garage-rock album, unabashedly embracing of Zombies-like slacker
psalms and clunky guitar manipulations.” – Paste 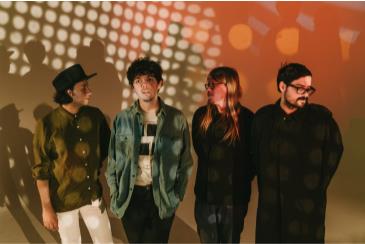