Jake Peavy and Friends at LIVEWIRE

Hero Jam 2016 will celebrate the service and honor of U.S. military personnel and proceeds from the event will directly benefit programs of the USO. Hero Jam will specifically support the USO’S Transition 360 Alliance, a national initiative of the organization’s 75th anniversary. The initiative is designed to help U.S. military personnel and their families transition successfully back into their civilian lives after their active military service ends.

“As we kick off the baseball season here in Arizona, it’s the perfect time to bring people together to celebrate and support one of the most important missions of our foundation – to show our gratitude to our nation’s military in the work that they do to serve and protect,” said organizer and performer Jake Peavy. “I know that the music in the room at Hero Jam will inspire our military and feel great for those who come out to support the incredible work of the USO.” 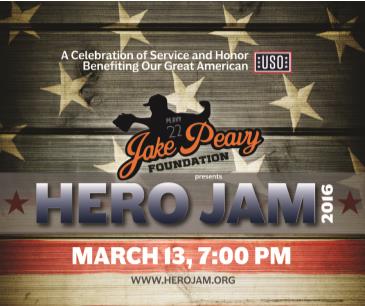