Haste is taking the Saturn stage with special guests Justify These Scars, GT and Qualifier

Legendary post-hardcore band, Haste, has been playing their brand of fierce metal mixed with elements of punk and hardcore, since their start in 1993. Hailing from Birmingham, AL, Haste quickly made a name for themselves locally and regionally with their energetic and infectious live shows. Their influences include a wide spectrum of genres. Incorporating everything from Slayer, Snapcase, Sparkmarker, Bad Brains and Tool, to Johnny Cash, Failure and Jeff Buckley. After releasing several tracks on various compilations, and a 7” E.P. on 123 Records, Haste signed with Century Media Records and released their first full length, Pursuit In The Face Of Consequence in 1999. 2001 saw the band release their second full lenth, When Reason Sleeps, followed by their final full length, The Mercury Lift, in 2003. Extensive touring gained the band a following all over the US and Canada, as well as internationally. Over the years Haste has shared the stage with Bad Brains, Lamb of God, A Perfect Circle, Turmoil, ZAO, BoySetsFire, Shadows Fall, Coheed and Cambria, Sick of It All and My Chemical Romance, just to name a few. Haste is: Kelly Reaves (Vocals) Chris Mosley (vocals) Jason Burns (guitar) Nick Brunson (guitar) Brandon Thrasher (bass) and Jeff Gardner (drums). 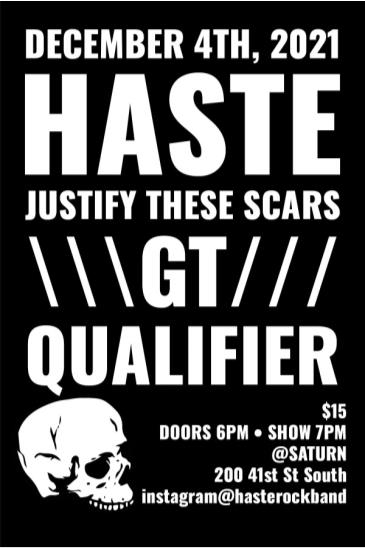