Happy Traum was smitten by American folk music as a teenager and began playing guitar and 5-string banjo. He was an active participant of the legendary Washington Square/Greenwich Village folk scene of the 1950s and ‘60s, and studied guitar with the famed blues master, Brownie McGhee. Over the past five decades he has performed extensively throughout the U.S., Canada, Europe, Australia, and Japan, both as a soloist and as a member of various groups. His avid interest in traditional and contemporary music has brought him recognition as a performer, writer, editor, session musician, folklorist, teacher and recording artist.

Happy's first appearance in a recording studio was at a historic session in 1963 when a group of young folk musicians, including Bob Dylan, Phil Ochs, Pete Seeger, Peter LaFarge and The Freedom Singers gathered in Folkways Records' studio for an album called Broadsides. Happy with his group, the New World Singers, cut the first recorded version of "Blowin' In The Wind", and Happy sang a duet with Dylan on his anti-war song "Let Me Die in My Footsteps." (These tracks were re-released in August, 2000 by Smithsonian/Folkways Recordings as part of a boxed set, "The Best of Broadsides 1962 - 1988: Anthems from the American Underground."

The New World Singers (Happy, Bob Cohen and Gil Turner) soon recorded an album for Atlantic Records, with liner notes by Bob Dylan, and released a single of the first recorded version of "Don't Think Twice, It's All Right." The group toured folk clubs throughout the U.S. and Canada, including several stints at Gerde's Folk City and the Bitter End in the Village, the Riverboat in Toronto and the Gate of Horn in Chicago.

His other books include "Bluegrass Guitar," "The Blues Bag," "The Blues Guitar of Brownie McGhee," "Basic Guitar Lessons," "Folk Guitar as a Profession" "Flatpick Country Guitar" and "The Children's Guitar Guide," among others. He also edited and/or transcribed "The James Taylor Songbook," "The Incredible String Band Songbook" and the "Arlo Guthrie Songbook," and was music editor for the historically important Woody Guthrie book, "Hard Hitting Songs for Hard Hit People."

Happy also started writing for Sing Out! The Folksong Magazine and, in 1967, he became the magazine's editor, a position which he held for three years. Happy has also written articles and instructional columns for Rolling Stone, Acoustic Guitar, Guitar Player and other music publications.

Happy and Artie:
In 1967, Jane, Happy and their three children moved to Woodstock, NY, and Happy and his late brother, Artie Traum, formed a duet that, according to Rolling Stone, "defined the Northeast folk music style." Their performances at the 1968 and 1969 Newport Folk Festivals helped to gain them an avid following and a contract with famed manager Albert Grossman. This strong musical partnership lasted until Artie's untimely death in July, 2008.

In 1970 Happy and Artie recorded their first album for Capitol Records, "Happy and Artie Traum," which The New York Times called "One of the best records in any field of pop music."

A second highly praised album, "Double Back," soon followed. Happy and Artie toured extensively throughout the U.S. and, in 1972, they made their first trip to England to tour folk clubs and play at the prestigious Cambridge Folk Festival. Happy also traveled to Brittany, France to make the first of several appearances at the Kertalg Festival.

"Between them they've been studio musicians, composers, comedians, writers, editors, folklorists, and a host of other things.... A brilliant and unique entity in the world of country-folk music." - The New York Times

Bob Dylan and Allen Ginsberg:
In 1971 Happy once again joined Bob Dylan in the studio, playing guitar, banjo, bass, and singing harmony on three songs ("You Ain't Goin' Nowhere," "Down In the Flood," and "I Shall Be Released,") which appeared on "Bob Dylan's Greatest Hits, Vol. 2." A fourth cut, "Only a Hobo," was included in Bob's "Another Self-Portrait" box set, released in 2013.

Earlier that year, Dylan had invited Happy to participate in a famous session with poet Allen Ginsberg, which resulted in the box set, "Holy Soul Jelly Roll," (re-released in 2016 as "First Blues"). The legendary John Hammond produced the session, which also included Dylan, David Amram, Jon Scholl, Ed Sanders, Gregory Corso and several other well-know musicians and beat poets. This resulted in a long friendship and musical association between Happy and Allen Ginsberg. In 1974 Happy and Artie cut "Hard Times In The Country" (Rounder), their third duet album, with liner notes by Allen Ginsberg.

Happy recorded his first solo album, "Relax Your Mind," in 1975 and embarked on the first of many European tours, bringing him to England, France, Belgium, Holland, Germany and Scandinavia, among other countries. 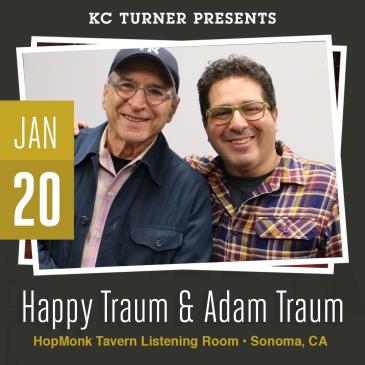