Hannibal Buress is a wildly popular Emmy and WGA Award nominated comedian, writer and actor who is a favorite of fans and critics on big and small screens alike. With his own weekly TV series on Comedy Central, his first national theatre standup comedy tour sold out, and The New York Times lauding him as one of the most "supremely gifted and respected" comics around, Hannibal is emerging as a comedy superstar.

This summer, Hannibal wrote, Executive Produced, and starred in his own weekly comedy TV series, “Why? With Hannibal Buress,” which premiered on Comedy Central on July 8th, 2015 at 10:30PM ET/PT. Shot in front of a studio audience, the show asks life’s biggish questions, celebrating Buress’ hilariously brilliant off-beat voice and point-of-view. If it’s in the zeitgeist, Buress will address it. Hannibal answers the burning questions on his mind through stand-up, filmed segments, man-on-the-street interviews and special, in-studio guests, providing his unique perspective on each week’s topics. Each episode tapes the same week it airs. “Why? With Hannibal Buress” is Executive Produced by Buress, Jeff Stilson (“The Chris Rock Show,” “Da Ali G Show”) and Dave Becky of 3 Arts Entertainment. Hannibal is also currently working on his next hour standup special, which will premiere on Netflix in 2016.

Hannibal is a cast member on Comedy Central’s hit series Broad City, as well as the co-host of Adult Swim’s The Eric Andre Show. Broad City will shoot its third season in September 2015 and The Eric Andre Show will shoot its fourth season in August 2015. This year he also served as host of The 2015 Webby Awards, and he appeared as a roaster on The Comedy Central Roast of Justin Beiber on March 30th. In addition to his well-loved recurring TV characters, he has been featured on several comedy-fan favorite TV shows including FX’s Louie, Fox’s

Bob’s Burgers and The Mindy Project, Comedy Central’s Kroll Show, and Adult Swim’s China, IL. He has written for NBC’s Saturday Night Live as well as 30 Rock, and he is a regular on the late night TV circuit, with appearances on The Tonight Show with Jimmy Fallon, The Late Show with David Letterman, Jimmy Kimmel Live, Conan, and The Late Late Show with Craig Ferguson.

Hannibal’s highly-rated second hour standup special “Hannibal Buress Live from Chicago” premiered on Comedy Central on March 29th, 2014, with GQ declaring “He makes us ugly laugh. Hard.” His first hour special, “Animal Furnace,” premiered on the network in May 2012. In the first half of 2015, his first theatre standup comedy tour, The Comedy Camisado Tour, played to sold out audiences across the country.

In addition to his TV and standup comedy, Buress recently appeared on the big screen in the blockbuster comedy feature “Neighbors,” starring Seth Rogen and Zac Efron. Up next in 2015, he will appear in the feature film Band of Robbers. He just finished shooting Daddy’s Home alongside Will Ferrell and Mark Wahlberg, which is set to premiere Christmas 2015, and he will be lending his voice to the animated films The Secret Life of Pets and Angry Birds.

For more information go to www.hannibalburess.com 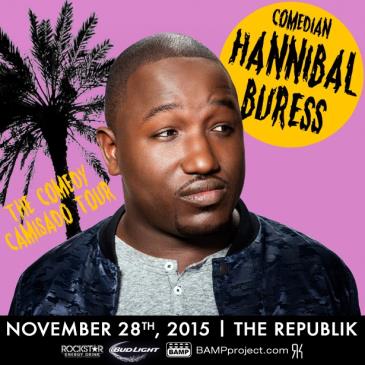