Recorded last year in Nashville with GRAMMY®-nominated producer Jay Joyce (Cage The Elephant, Eric Church) at the helm, “INTO THE WILD LIFE” is highlighte dby the historic new single, “Apocalyptic.” The track recently ascended to the top at Active Rock radio outlets nationwide in an astounding 9 weeks – the first time a female-fronted band has scored #1 hits at the format three times as well as the first to have #1 songs from two consecutive albums. Furthermore, “Apocalyptic” has hit #1 at Mainstream Rock radio, marking Halestorm as the fourth-ever female-led act to top the format more than once. As if that weren’t enough, the song’s electrifying companion video has drawn over 2 million individual views thus far at Halestorm’s official YouTube channel, www.youtube.com/watch?v=1PXkCAiV0Ww.

A new companion video for“Amen,” the next single from “INTO THEWILD LIFE,” recently debuted at RollingStone.com (www.rollingstone.com/music/videos/watch-halestorm-rebel-against-day-jobs-in- raucous-amen-video-20150302). Directed by DJay Brawner (EdSheeran, Panic! At The Disco), the provocative clip has surpassed 1.5 million views at www.youtube.com/watch?v=YGchlqCjj8A

In addition to its extraordinary popular success, “INTO THE WILDLIFE” has also begun receiving unprecedented critical acclaim. “(The album) is a different beast altogether, ”declared veteran rock journalist Jon Wiederhorn at Yahoo!Music, “one that forsakes everything that has worked for Halestorm thus far (slick production, traditional songwriting arrangements, a radio-ready mix of rockers and ballads) and takes a leap into the unknown… The risk of following its instincts has paid off.” 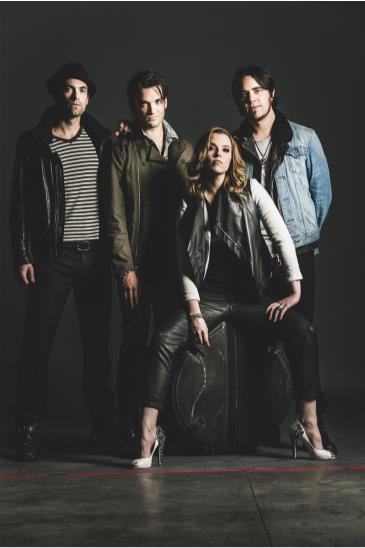