Performance time has been updated to 7:30 pm.

With “INTO THE WILD LIFE” Halestorm reach deep within and conjure their most engaging and eclectic songs to date. On “INTO THE WILD LIFE” they push their musical boundaries further than we’ve seen thus far in their catalog, crafting songs that rise from a whisper to a scream and back again, proving that there’s no limit to creativity. And nothing will stop them from realizing their artistic vision.

On “Sick Individual,” which opens with a drum solo and blends into a dramatic rock anthem, Hale sings, “I’m doing this thing called ‘whatever the f--- I want, want, want.’” The attitude- laden lyric encapsulates the vibe and versatility of the record. Shards of metal, passages of pop and reams of rock – both classic and contemporary -- abound throughout “INTO THE WILD LIFE,” the exuberance of which is only matched by the band’s passion and confidence.

“On the last record, we hit all these crazy milestones,” Hale says. “All of a sudden the world was aware of us so we celebrated unabashedly.” Indeed, “Freak Like Me” and “Love Bites (So Do I)” both reached #1 on Active Rock charts, making Halestorm the first ever female-fronted band to top the format’s airplay ranking. In addition, the band won a Grammy for Best Hard Rock/Metal Performance for “Love Bites (So Do I).” The accomplishments didn’t stop there. Hale collaborated with “America’s Got Talent” star Lindsey Stirling on the EDM song “Shatter Me” and performed with country maverick Eric Church at the CMT Awards, demonstrating her versatile vocals mix with any genre. On top of that, Hale was honored by Gibson Guitars, which celebrated her accomplishments by creating a Lzzy Hale signature Explorer guitar.

“All of the attention was amazing and fueled our confidence,” Hale says. “So we decided to throw everything we were used to out the window and just go for it.”

Indulging every whim, Halestorm wrote songs that pulsate, pound and soar, as well as confessional, heartstring-tugging tunes and everything between. “Amen,” grooves to a chain- gang shuffle and sparse keyboards, featuring a verse reminiscent of Fleetwood Mac and a chorus that has more in common with Joan Jett. Then there’s “Mayhem,” a confrontational blast of adrenaline that builds from echoey seduction to full-blown euphoria.

“To me, this album is about independence and the bravery it takes to step into the unknown,” Hale says. “It’s not like we strayed from what we are, it’s just a lot more of what we are.”

In addition to experimenting with previously unexplored styles, Halestorm took an equally bold approach to recording. Instead of tracking all the instruments separately and then tweaking them later, Halestorm recorded everything live in the studio with the help of producer Jay Joyce (Cage the Elephant, Eric Church).

“It was literally the four of us in a circle in this church playing everything the same way we do onstage,” Hale says. “We had to play everything over and over again until we were all riding the same wave. Without making a live record, we wanted to capture the kind of chemistry and energy we have in concert.”

After Halestorm recorded the songs, Hale went back and redid some of her vocals to maximize their emotional intensity. And Joyce applied the same rigorous standards to her final vocal  takes as he did to the band’s initial recordings. “If I wanted to do something over again, I strapped on the guitar and sang all the vocals from start to finish,” Hale says. “In the beginning I said to Jay, ‘Hey, if I don’t quite hit that note we can just fix it, right?’ And he said, ‘No, that’s not what you guys said you wanted. You gotta do it all over again.’”

As frustrating as the process sometimes was, by the end of every final take Halestorm were ecstatic. “It really brought out the best in us because we had to trust ourselves and literally be ‘on,’” Hale says. “It was hard, but the results were so much more rewarding because we didn’t try to compromise, and I feel like the excitement of that shows through all over the record.”

Instead of recording in a major studio in Los Angeles or New York, Halestorm created “INTO THE WILD LIFE” in East Nashville, and when they weren’t at the studio they soaked in the musical culture of the legendary city. “I’m sure a Southern bug crawled into my ear just from hanging out there for a while,” Hale says. “There are a lot of great musicians there, for sure, as well as a lot of great classic rock. That was a big part of this album. While we were doing it, I was   listening to a lot of the same stuff that first got me inspired. I went back and listened to a lot of Black Sabbath and Alice Cooper and some Zeppelin. Our attitude was, ‘Let’s immerse ourselves in the things that got us excited in the first place. Instead of trying to reinvent the wheel we said let’s be the wheel and be the best wheel we can be.’”

The first single from “INTO THE WILD LIFE” is “Apocalyptic,” a bluesy belter about a turbulent relationship and amazing chemistry between the sheets. While Halestorm alluded to sex and decadence in past songs like “I Get Off” and “Love Bites (So Do It),” on “Apocalyptic” and “Amen” Hale drops the metaphors and tells it like it is. “I wanted some songs were a little confrontational and sexual,” Hale says.

The more acoustic-based songs on “INTO THE WILD LIFE” are just as revealing as the rockers. In the confessional folk-pop number about love gone wrong, “What Sober Couldn’t Say,” Hale sings, “Heading for a blackout, hurting like hell/finding my way to the bottom of the bottle.” And on “Dear Daughter,” she starts with spare, delicate piano chords and builds into a poignant ballad filled with pearls of wisdom: “Dear daughter, hold your head up high/there’s a world outside that’s passing by.”

“The last album cycle we did was the first time my mother didn’t come with us; for a long time both of my parents were working for us,” Hale says. “As soon as your parents are gone, at first there’s a stage where you go, ‘Whew, nobody’s going to tell me what to do!’ And then you think, ‘You know what? If it wasn’t for my parents’ support we would have never started the band as early as we did. And we probably wouldn’t have gotten to this point.’”

With “INTO THE WILD LIFE,” Halestorm have developed as a band without compromising their identity. From the start, they’ve had the conviction and songwriting skill to appeal to fans of both Heart and Metallica. Now, they’ve stretched their musical boundaries even further to come up with an album that exhibits a sheer joy for whatever style of music they chose to embrace.

“Doing this album reminded us that being in a band is still magical. And four people that actually love each other and can rock out with each other can experience this refreshing kind of creative freedom,” Hale says. “At the end of the day, we can laugh and turn to each other and say, ‘Look, guys. We are still here! For whatever reason, we still dig each other and we still love making music together.’ And now we can go out there and do whatever the hell we want.” 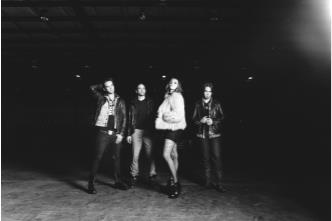