After scoring two top 10 singles (“I Get Off” and “It’s Not You”) from their self-titled debut and touring steadily for two years with acts as diverse as Shinedown, Stone Sour, Disturbed, Megadeth, Papa Roach, Godsmack and countless others, Pennsylvania quartet Halestorm are back with their second full-length, The Strange Case of…. Musically diverse and emotionally revealing,the album resonates with a new found poignancy that takes Halestorm to a new level of creative achievement.

“I was extremely proud of Halestorm when we released it, and I still love it, but I think I was using mostly one musical technique throughout,” explains front woman Lzzy Hale. “We were on ‘ten,’ and we blew through the songs in a safe way – or as safe as something that goes, ‘I get offon you getting off on me’ can be. This new record demonstrates more depth and heart. It’s a lot more expressive and really lets down the barriers.”

Halestorm started writing for the new record while they were on the road in 2010.  Then when the band finished the Uproar Tour in May 2011, they entered the studio with producer Howard Benson (3 Doors Down,Seether, Three Days Grace) and tracked one of the heaviest songs of their career, “Love Bites (So Do I).”

“At that time, I decided,‘I’m going to scream my head off and make really gritty songs,’” Hale says. “When we finished ‘Love Bites,’ the engineer at Howard’s studio, Bay Seven,said, ‘I’m pretty sure that’s the fastest song we’ve ever done here.’”

Excited by the escalated tempos and raw energy, Hale returned to writing mode and bashed out more anthemic rockers filled with uncompromising rhythms, soaring vocals and searing leads. Then one night at 4 a.m., after enduring a personal setback, she wrote abare, vulnerable sounding song and recorded it on her cell phone. Flooded by emotion and maybe a glass of wine too many, she immediately emailed the unpolished song to Benson and the band’s A&R man.

“The next morning Iregretted having sent it because I didn’t hear back from them,” she says. “And then a day later they got back to me and went, ‘Oh, my God, we didn’t know you had this in you. Please write more songs like that.’”

Encouraged by the supportand inspired by the urge to purge, Hale wrote more intimate numbers, including the sensitive piano ballad “Break In,” the sparse and melancholy “In Your Room” and the  mid-paced ode “Beautiful With You.” She and her band mates also crafted heavier numbers, including "I Miss The Misery," with its start-stop chorus rhythm and confrontational lyrics and “Rock Show,” which blazes with euphoric vocals and motivational riffs.  That was when Halestorm realized the new collection of songs was some what schizophrenic. At first Hale was unsettled by the polarization, then she penned the song “Mz. Hyde” specifically about the two disparate sides of her personality and the album immediately swam into focus.

“When they heard that, the guys went, ‘Oh my God, you are Mz.Hyde!’” Hale says. “So suddenly this predicament with having this record that had a split personality was abouthaving a split personality. Sometimes I need a shoulder to cry on, sometimes I need to wear a pair of jeans instead of fishnets. But I also like being powerful and being a leader and yelling, ‘Hello, Cleveland.’”

Halestorm recorded The Strange Case of… in three sessions with Benson.  By the time they entered the studio for the last time, they had written 56 songs, which they narroweddown to the 17 they tracked. The first single “Love Bites (So Do I)” is astorming rocker that illustrates Hale’s individuality, sense of humor, and willingness to represent young women in today’s fast-paced society.

“I was talking to this little girl over Twitter who was going through her first breakup, and she was asking me for advice,” recalls Hale, who regularly interacts with her fans online. “She typed ‘Love Bites,’ and I replied, ‘Well, so do you, darling. You can still bite back.’ It was meant to be an empowering song for people when love goes down the tubes, and I think it’s a very realistic way of looking at relationships. Nobody talks about all the crap you have to do to keep something alive or just deal with your boyfriend or girlfriend. They always talk about falling in love or having your heart broken. So this is a way of saying, yes,everything can end, but it’s rejuvenating to stand up and go, ‘This sucks right now, but it’s not going to take me down with it.’”

Other tracks, such as “You Call Me a Bitch Like it’s a Bad Thing” and “Freak Like Me” turn epithets into proud slogans, while “Daughters of Darkness” is an admission that women, like men, have their dark side. “Even with the sweetest woman in the world, you click a switch somewhere, and she’s a little bit crazy or she has her secrets,” Hale says. “And a lot of times you see these girls let all that stuff out a tour concerts, which is really gratifying.”

One of the most meaningful songs on The Strange Case Of… to Halestorm is “Here's To Us,” a declarative mission statement which starts with a delicate arpeggio and builds to a rousing pop/rock refrain. As much as it represents the band, “Here’s to Us” was actually an afterthought. “It came together after we already thought the album was complete,” Hale says. “It's our ‘bottom of the ninth, bases are loaded… home run!’ The song is about celebrating the ups and downs of your journey as you go along because even the bad times can be reasons to crack open the champagne.”

One reason Halestorm has developed the ability to sound completely self-assured and cohesive whether they’re tearing down the rafters or gently massaging a bruised psyche is because they’ve had plenty of time to hone their craft and celebrate their exceptional chemistry. Hale and her brother and drummer Arejay started the group more than a decade ago when she was 13 and he was just 10. From the very beginning they were in it to win it even though they paid their dues along theway. Back in the day, the members lost a talent show to a tap-dancing cowgirl, played Friendly’s for free ice cream, piled the stage with homemade explosives that sometimes went off right in front of their faces, and even played at afuneral.

Halestorm’s determination paid off. Before long, they were playing local bars even though they were underage.  They secured guitarist Joe Hottinger in 2003 and bassist Josh Smith in 2004, and in 2005, Halestorm signed a deal with Atlantic Records and released the live EP One and Done, which included an early version of fan favorite “It’s Not You.” The band continued to write, tour and record and in 2009 released their self-titled full-length album. Inspired by Halestorm’s exuberance and spirit, the band’s loyal legions rapidly grew. They became favorites at rock radio, highlights of music festivals and friends of the multitudes of groups they opened for or headlined with.  Halestorm went on to sell more than 300,000 copies.

Backing their monster riffs and euphoric choruses with pure rock and roll attitude, Halestorm followed up their eponymous release with the covers EP ReAniMate. In addition to including aggressive fist-pounders by Skid Row, Guns N’ Roses and Temple of the Dog, Halestorm demonstrated their sonic scope with versions of tracks by The Beatles and Lady Gaga. The boundary-stretching was just aprelude to the muscle and sensitivity of The Strange Case Of…

“We’ve taken everything wecan do and stretched it in both directions,” Hale says. “This record goes fromone song that’s just vocal and piano and the lowest and softest I’ve ever sungall the way up to the highest notes and craziest screaming I’ve ever done.”

As musically advanced as The Strange Case Of… is compared to Halestorm’s debut, the band still has plenty of growth left in them and continue to write songs at an alarming rate. “I create all the time,” Halesays. “And the four of us are working together more now, so we’re really gelling better than ever. We’re really excited with how far we’ve gotten with this album, and we can’t wait to see where we can go in the future. It feels like there are no rules or boundaries, and that’s the ultimate freedom.” 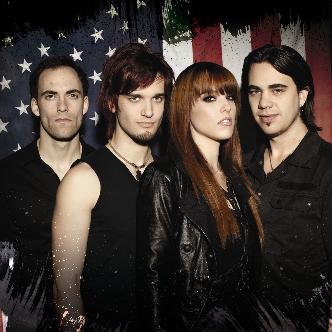