Last year, L.A.-based producer Gryffin delivered two heavy-hitting singles that showcased his deeply melodic take on dance music. With both tracks built on a graceful fusion of indie and electronic elements, “Heading Home (ft. Josef Salvat)” shot to #1 on Spotify’s US and Global Viral charts, while “Whole Heart” (a collaboration with Bipolar Sunshine) hit #2 on Spotify’s New Music Friday playlist. Also known for turning out several of the biggest remixes in recent years—including his masterly reworkings of Tove Lo’s “Talking Body,” CHVRCHES’ “Clearest Blue,” and Years & Years’ “Desire”—Gryffin is now offering up his latest original track and bringing his boundary-shattering artistry to bold new heights.
Emotionally charged and irresistibly high-energy, the aptly named “Feel Good” is powered by hypnotic melody, massive beats, and a magnetic vocal performance from singer/songwriter Daya. Fresh off her Grammy Award win for “Don’t Let Me Down” (the multi-platinum smash that earned 2017’s Best Dance Recording prize), Daya lends her soulful vocals to Gryffin’s immaculate arrangement of heavy synth and delicate guitar work. In crafting that arrangement, Gryffin drew equally from his edgy ingenuity as a producer and his carefully honed musicality as a longtime guitarist and classically trained pianist.
“The lyrics that Daya came up with had so much intensity to them—writing about that significant other in your life who puts you in a positive, happy state of mind, even when bad things may be happening in your life or in the world. I wanted the production to reflect that intensity, but at the same time create a really positive vibe,” explains Dan Griffith, who’s made music under the name Gryffin since 2014. “My goal with the song was to find that balance, and I ended up hitting it by adding a lot of synth sounds I’d never used before, and by bringing in different guitar textures and then flipping them in a new way. That’s what the Gryffin project is about overall: making electronic music but using real guitar and real piano so that there’s this organic feeling to every song.”
Originally from the San Francisco area, Gryffin began his musical journey by taking up piano at age seven. In high school he added guitar to his repertoire in addition to writing his own music for the first time. While studying electrical engineering at University of Southern California, Gryffin broadened his sonic palette by diving into the world of electronic music and teaching himself production with a downloaded copy of Ableton. “I got started during a really exciting time for electronic music—I remember thinking I’d never heard sounds like that before,” recalls Griffith, who lists the early work of artists like Skrillex and Avicii among his first influences. “It all felt so fresh and new to me, and I wanted to see if I could make music like that too.”
Toward the end of his studies at USC, Griffith started posting his original productions online and soon gained attention for his inventive sensibilities. One of his earliest releases, a 2014 remix of Ellie Goulding’s “Burn” was hailed by EDM Tunes for “evok[ing] a cosmic, almost transcendental ambience with an electric guitar backdrop and airy vocal splices,” and quickly expanded his online following. “That remix was the first time I’d used guitar in a dance music production,” notes Gryffin. “All of a sudden I had all these producers messaging me to ask how I did it, which was the moment when I realized that maybe this was a direction I should keep pursuing.”
As he sharpened his production skills and refined his vision, Gryffin pushed forward with releasing highly acclaimed remixes (including his 2014 take on Maroon 5’s “Animals,” which would eventually catch the attention of Interscope Records and lead to his signing). In late 2015 he made his stage debut at the SnowGlobe Music Festival, unveiling a dynamic performance that deftly introduced live instrumentation into the dance music format. With “Heading Home” arriving in early 2016—and accumulating a million plays within just a week of its release via Darkroom/Interscope Records—Gryffin next embarked on his sold-out Heading Home Tour and later played major summer festivals like Electric Forest, Camp Bisco, and Firefly. Released in August, “Whole Heart” racked up more than 35 million streams on Spotify and served as the launching point for Gryffin’s biggest tour to date: the Whole Heart Live Tour, a fall 2016 trek that spanned North America.
With a highly-buzzed about set at Coachella both weekends this year and upcoming performances at A-list festivals like Lollapalooza and Governor’s Ball 2017, Gryffin thrives on creating an unforgettable stage show that blurs the line between electronic music and raw live performance. Further proving the vitality of his music, several artists have taken to performing Gryffin’s versions of their own songs when playing live. And with his name referencing the mythical half-lion/half-eagle creature and its power to soar, Gryffin aims to continue instilling a potent, uplifting energy into each of his tracks. “Part of the reason I like working with piano and guitar so much is that it adds a human element that can’t be replicated—you might not even realize it as a listener, but you feel it on some deeper level,” he says. “It builds this connection that’s really powerful, and to me that ability to make music that moves people and picks them up is the most rewarding thing in the world.” 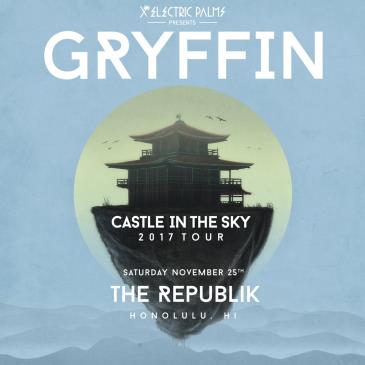