Legacy Concerts at The High Watt

Singer/songwriter Greyson Chance is an emotive, pop-oriented artist known for his lyrical, often piano-based material. Chance first garnered attention online before breaking through with his 2011 debut, Hold on 'Til the Night, which hit number 29 on the Billboard 200. His sound has grown ever more nuanced, incorporating textured electronic production alongside his acoustic work, as on 2019's Portraits and 2021's Trophies EP.
Born in Wichita Falls, Texas in 1997 and raised in Edmond, Oklahoma, Chance first began playing piano at age eight. In April 2010, a video of Chance performing Lady Gaga's "Paparazzi" at his middle-school talent show was uploaded to YouTube and went viral. It soon caught the attention of Ellen DeGeneres, who invited the 12-year-old to perform on her show, and eventually signed him to her then newly launched eleveneleven record label. A deal with Interscope followed, and in December 2010 he delivered his debut single, "Waiting Outside the Lines." The full-length Hold on 'Til the Night followed in 2011 and cracked the Top 40 during its first week of release. The EP Truth Be Told, Pt. 1 arrived in 2012.
Chance continued to tour and record over the next few years. As he matured his voice deepened, and his taste shifted toward nuanced indie rock and alternative electronic pop. He showcased this sophisticated sound on his 2016 EP Somewhere Over My Head. Included on the set were the singles "Afterlife," "Hit & Run," and "Back on the Wall." Also that year, he guested on tyDi and Jack Novak's dance track "Oceans." Chance came out as gay in July 2017, making the announcement via social media and stating that he was happy and proud of who he was. The dramatic single "Low" followed that December. A spate of singles appeared over the next year including "Lighthouse," a collaboration with DJ/producer Fabian Mazur, "Good as Gold," and "Twenty One."
In 2019, Chance delivered his sophomore full-length album, Portraits, which featured production by Willy Beaman, Christian Medice, and Todd Spadafore. Included was the single "Shut Up." The EP Trophies arrived in June 2021, as did the stand-alone track "Hellboy."
https://greysonchancemusic.com/ 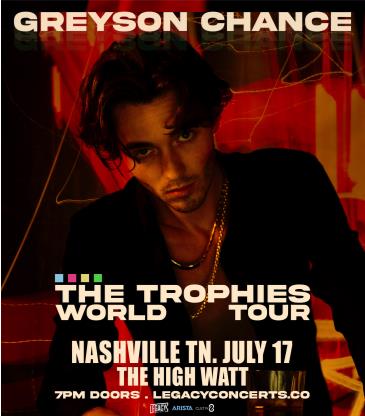 Show Map
View One Cannery Row in a larger map