An Evening with Graham Parker

ABOUT:
In the spring of 1975, Graham Parker, a 24-year-old petrol pump attendant from Surrey, England, began to drive up to London to meet like-minded musicians and get a backing band behind his songs, which he now considered to be stronger and more interesting than anything he was hearing on the radio. By placing an advert in the Melody Maker he met Noel Brown, a guitarist, and Paul “Bassman” Riley, a bass player who had featured in Chilli Willi and The Red Hot Peppers, a so- called “pub rock” band that had recently split up. Riley thought Parker should meet Dave Robinson, a manager who ran a small studio above the Hope and Anchor pub in Islington. Robinson had previously managed Brinsley Schwarz, another demised pub rock outfit that included its eponymous guitarist, Nick Lowe on bass and Bob Andrews on keyboards.

Lights went off in Robinson’s head when he heard Parker’s songs, and shortly after recording some demos, began to ease Schwarz and Andrews, along with a young rhythm section comprised of Andrew Bodnar on bass and Steve Goulding on drums, into place behind Parker. Together with Martin Belmont, the former guitarist of Ducks Deluxe, yet another alleged pub rock band that had also called it quits, they began rehearsing that summer.

Before they had played a note together however, Parker had secured a major record deal with Phonogram records after Robinson got a tape of a Parker demo to Charlie Gillett who hosted an eclectic Radio London show named Honky Tonk. As soon as the song had had its airing, Nigel Grainge from Phonogram called Gillett insisting he wanted to sign Parker right away.

Until then, Parker had had exactly zero professional, or even semi-professional, experience in the music business. Before his journey to London, he had seen the name Brinsley Schwarz in the Melody Maker gig guide and imagined that with a name like that, they must surely be a German heavy metal band.

During those first rehearsals, Robinson brought a “tall, bird-nosed fellow,” as Parker described him, to the sessions and said that he would produce their first LP. His name was Nick Lowe, the aforementioned bass player in “the German heavy metal band.”

Parker and the Rumour’s first album “Howlin’ Wind” was recorded in London in late 1975 and released in April 1976 to widespread critical acclaim. This was followed in the same year by “Heat Treatment” and a hit EP, “The Pink Parker,” released on pink vinyl.

The band played a handful of small venues starting in late ‘75 before opening for the hit band Ace (“How Long”) on a concert tour. Within a year they were headlining concert hall tours in the UK themselves and toured America twice, driving around in a station wagon and picking up gigs wherever Dave Robinson could find them. Parker’s label, Mercury Records, the American arm of Phonogram, paid scant attention to the band. With punk rock and new wave still a year and a half away from making any impression, Mercury failed to see a marketing angle to use and therefore left them, much to Dave Robinson’s annoyance, largely to fend for themselves in the land of Styx and Kansas. But their critical acclaim and fervent and growing fan base could not be denied and by 1978, despite the mixed reaction to their third album “Stick To Me,” released in 1977, they made steady progress and began to gain a reputation for being a premier live band throughout the world. Finally, after the lack of support from Mercury, Parker signed a lucrative deal with Arista records and released the Jack Nitzsche produced “Squeezing Out Sparks” in 1979. The album, which contained such classics as “You Can’t Be Too Strong,” “Discovering Japan” and “Passion Is No Ordinary Word” reached #44 in the US album charts, sold a quarter of a million copies and was widely hailed as a masterpiece. Parker and the Rumour toured extensively in the year of its release, beginning at Belfast’s Witlow Hall on February 2nd and ending at the Town Hall, Auckland, New Zealand on the 26th of November, with very little time off in between.

They made their last album together, “The Up Escalator,” with Nicky Hopkins and Danny Federici replacing Bob Andrews on piano and organ respectively.
Schwarz and Bodnar worked often with Parker on both recordings and onstage during the ‘80’s most significantly on the successful “The Mona Lisa’s Sister” in 1988.
Parker has continued to release albums regularly on a variety of labels, including the standout collections “Struck By Lightning” on RCA, “Deepcut To Nowhere” on Razor & Tie, and “Don’t Tell Columbus” released on Bloodshot Records in 2007.
In the year 2000, St. Martin’s Press published a collection of short stories by Parker entitled “Carp Fishing On Valium” which was republished later in 2012 on Tangible Press in both book and e-book form with the addition of three previously unpublished stories featuring the suburban travails of the books’ protagonist, Brian Porker.

In May 2011, Parker called the Rumour members out of the blue to work with him once again on a new album that would be their first together in over 30 years. The new album, “Three Chords Good,” was recorded in July of that year. In a strange quirk of fate, not more than two weeks after the band confirmed that they would indeed be agreeable to a recording reunion, movie and TV writer/director/producer Judd Apatow got hold of Parker and proposed a meeting. Apatow loosely described to Parker a movie project he was writing in which he thought Parker might have a small part to play. The movie, “This Is 40” was released theatrical on December 21st 2012 and featured Parker acting as himself with performance sequences in a duo setting (with Tom Freund) and with the Rumour. "This Is 40" hit number three box office on its first weekend and showed for months in movie houses everywhere.

“Three Chords Good” was released in October 2012 and tours of both America, the United Kingdom and Europe followed.
“Don’t Ask Me Questions,” a documentary by the Gramaglia Brothers (“End Of The Century: The Story Of The Ramones”) had been in the works for over ten years and was basically finished when Parker announced to the film makers that he was about to do what he swore he would never do: reform the Rumour. The Gramaglias therefore filmed the entire recording sessions in conjunction with Judd Apatow and also shot footage of Parker and the Rumour in Hollywood on the movie set. The documentary was shown on BBC 4 to great acclaim.
A new Graham Parker and the Rumour album has now been recorded at the famous RAK studios. "Mystery Glue" was released worldwide by Universal Records in May 2015 on the obscure '70's Universal owned label, Cadet Concept, a former imprint of the famous Chess Records.

Parker has been touring in 2017 as a duo with Rumour guitarist Brinsley Schwarz and recently had a new song, “Love Comes,” placed in the Judd Apatow produced and directed HBO show “Crashing.” 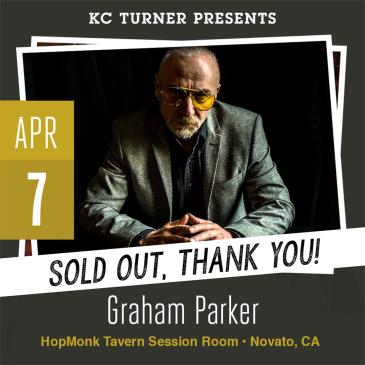