Grounded by multiple nationalities and roots as varied as they are far reaching, feeling connected and sensitive to the world is for Gidon a given. Routinely inspired by the majesty and wonder of nature, Gidon is the original that always stays true to his origins. A self proclaimed free spirit who’s creative vibes have only one love, Reggae music.

Now a multi-instrumentalist singer, song writer from the Sunshine State, who is currently germinating his distinct, high-vibe sounds straight out of his own sun kissed studio on the Californian coast. With a constant stream of refreshingly positive vibes throughout, Gidon’s genuine, up beat sounds are a golden gateway into the pure energies of Reggae Soul.

Specialising in smooth, authentic grooves enriched to the roots with culture, Gidon manages to fuse elements of rock, jazz, soul and old-school roots-rock-reggae, creating a sunny, groove-filled sound that is every bit as soulful as the Jamaican legends who inspired him.

Currently wrapping up on the finishing touches of a new EP. The first single and music video of "Trod The Road" released  on September 15, 2020. This latest collection pays homage to the diverse, cross-cultural influences that defined his early years. A musical footprint that has taken him from Los Angeles to London and back again via one of his most spiritual of homes, Kingston.

A handful of these tracks originated during those years spent living in Jamaica, collaborating with such legendary artists as Sly and Robbie, Beres Hammond, and Clive Hunt to name a few. Those master producers and artists lent their hands, hearts and ears to help propel Gidon’s uplifting music to the next level. This culminated at the time with the aptly titled “Rise” EP released through Slipway Records in 2016. It gained major airplay, finding its way on to the revered DJ David Rodigan's BBC 1 Radio Xtra show; as well as Dennis Bovell's "Dub on Air", and Chuck Foster's "Reggae Central" on KPFK.

James started playing guitar at 7 years old. Growing up he had plenty of opportunities to practice while he was grounded and sent to his room. Music is the only thing he’s ever wanted to do.  Through the years he’s had the privilege of working at some of the best guitar amplifier companies in the industry like Divided By 13 and Morgan Amplification. James is a big fan of Duesenberg, James Tyler, Asher and Novo Guitars; Morgan Amplification and Divided By 13; Love Pedals, JHS Pedals, Line 6 and Eventide.

Greyson Grimes started writing music and singing at a early age of 10. He found his love for emotional and dynamic music at his first concert which was "The Fray" in 2004. Since then he has been exposed to many genres and styles of writing and has become well known for his statement about his music and his social media handle @realfeelsmusic. Greyson Grimes started the band Thatcher In Sydney, Australia while attending a music school and majoring in Songwriting. He approached Daniel Nelson and Jonothan Cornella after writing a handful of material that needed a dynamic beyond just him and the guitar. Greyson Grimes has been apart of a few successful projects and has always shared a vulnerable but yet hopeful experience in the music he sets a side for Thatcher. Greyson has a large vision for Thatcher and believes the sky is the limit with over 400 songs composed in he last 5 years.

LA-based indie-folk artist Daphne Gale has a sound at once new and familiar. Her eclectic style bares traces of folk, jazz, and rock, seamlessly framing her smoky voice and stirring melodies. After graduating from college in 2019, Daphne moved to Vermont to work on a farm. With any downtime she found herself writing songs and eventually decided to move to LA to pursue her music. Daphne moved to LA in March 2020, performed at Soho House on March 9th, and then the world went on lockdown. Through the year of quarantine, Daphne continued to write and develop her voice, ending up with enough material to record, but no studio to speak of. In true DIY spirit she called up her friends on the East Coast and asked if they would meet somewhere in the middle to work on her music. To her surprise they all said yes. After two months living and recording in New Mexico, Daphne emerged with her first full length album, aptly titled Nomadder, which will come out July 23rd.
"Singer-songwriter Daphne Gale makes folk music flecked with jazz, sophisticated but uncluttered compositions accented by her clear-eyed vocals and conversational lyrics."
- Kevin Bronson, Buzzbands.LA
You can listen to her music HERE.

I challenge you toenter the world I have made just for you, and together, we will remind theworld that love, and humanity stand as the strongest premises of life. 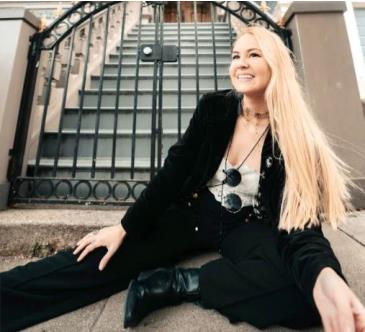