Geoff Tate is the original lead singer of Grammy-nominated Queensrÿche, a highly successful metal band formed in the 1980s. The renamed band, “Operation: Mindcrime,” comes from the Queensrÿche album of the same name. Tate is regarded as one of the most talented metal vocalists in music and has been performing for over 30 years.

Operation: Mindcrime was formed in 2014 and released their debut album, The Key, in September of this year. The band is formed of Rudy Sarzo, previously of Ozzy Osbourne and Whitesnake, Simon Wright, previously of AC/DC and Dio, Randy Gane, previously of MYTH and Kelly Gray, who previously toured with Queensryche.

Pete Cummings Band (ReverbNation | Facebook) will perform before Geoff Tate at this concert. 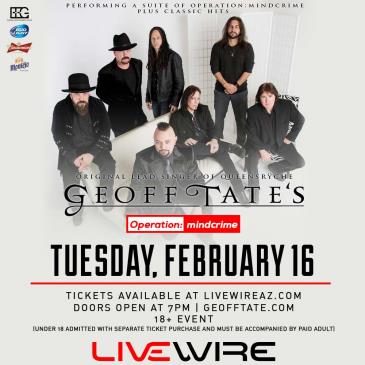