Pink Mist and Total Discharge will be opening the show!

Future Islands believe in true love, you can tell that because their songs speak through our lives. It’s as if their music has always been with us, soundtracking every great hope dawning realization and broken promise. Every fond embrace, each leap of faith. Over the last eight years Baltimore’s most quixotic and emotionally involving trio have maintained an admirable level of skill and pace, never slowing down for the corners. It’s vocalist Samuel T. Herring, William Cashion (bass, guitars), and Gerrit Welmers (keyboards, programming, guitars) who find themselves responsible. Their sound is at once beguiling and irresistible.  It’s one part melancholic, one part euphoric; full of animated bass lines, robust drum
machines and questing keyboards, all set off by Sam’s remarkably distinct, soaring vocal.

Future Islands came to life after all three members had served their tenure in the overtly conceptual Art Lord and The Self-Portraits, waggish band as comical as it was tender. With Art Lord they found themselves in a world of borrowed gear and frenzied house parties, spending endless hours booking tours in notebooks, burning CDRs in the van, Xeroxing sleeves. It’s the same DIY spirit that informs Future Islands to this day. Having toured tirelessly since the band’s inception in Greenville, NC back in 2006, Future Islands have now played in excess of 800 shows, often touring with their friends, most notably Dan Deacon, Ed Schrader’s Music Beat and Talk Normal. Sam, William and Gerrit all hail from small towns so they’ve made it their aim on tour to play as many off-the-radar places as possible.  It’s this dedicated groundwork that sets Future Islands apart from most, they’ve kept things traditional, converting people on the road, putting the time in, making friends first then fans. With each landmark album, they’ve been growing, loving, losing and leaving us wanting more.
Returning with their new album ‘Singles’, Future Islands have refined their unique sound further still. Having worked  with Thrill Jockey and Upset The Rhythm previously, ‘Singles’ marks the start of their new relationship with legendary label 4AD, more fitting home is hard to imagine. Chris Coady (known for his enduring work with Beach House, TV On The Radio, Grizzly Bear) mixed and produced the album, leaving his luminous fingerprint across the album’s radiant collection of pulse-grabbers and slow-burners. Packing an ever harder punch, it makes for a deeply resonant listen; an affectionate hand on the shoulder. ‘Singles’, the band’s fourth full length, is decidedly polished sounding album, it’s glossy like unapologetic pop, silken and lustrous, but check it’s pockets for the stockpile of realism.

‘Seasons (Waiting On You)’ kicks off the record indecidedly jubilant yet soulful manner, typical of the band’s most recent 7”s. It’s got all the passionate delivery and exuberance you’ve come to expect from Future Islands, only there’snew found relaxed distance and maturity at play. “People change, but some people never do” Sam wistfully calls out, fighting the corner for each nagging doubt and irrepressible desire that won’t back down. Whilst the song ebbs into hushed violin flurries and we’re left considering the grave of love, ‘Spirit’ leaps up, tumbling us over before chasing its descant deeper into the album.  Future Islands are perfectionists at teaming up some suitably yearning subject matter with an upbeat musical response and ‘Spirit’, much like ‘Doves’ and ‘Light House’, is a good case in point.
‘Back In The Tall Grass’ is propulsive tour de force of plucky bass and blushing synths, testing the heaviest hearts into united sway. “We’relong way from home, how did we get here?” questions Sam languidly, his voice never before sounding so absorbed and lost in thought, really lost, “four steps back and I’m gone” lost. ‘A Song For Our Grandfathers’ parades with self-assured splendour. “They said that if stared the abyss would stare back at me and so I did,” confesses Sam with the larynx oflonesome lion.  Meanwhile, William’s bass roots you to the spot, allowing the vivid touches of guitar and Gerrit’s efflorescent keyboard waves to soak you through. It also seems like particularly poignant lyric for Sam as he confronts personal ghosts and memories of feeling safe alike.

‘Singles’ is a bold album of wandering reflections and haunted wonder, Sam’s wounded howl on ‘Fall From Grace’ makes sure that much is clear. It’s an album that keeps running from the off and keeps running from restlessness that threatens to consume. As the record concludes in cascading delight with ‘A Dream Of You And Me’ your preconceptions of Future Islands being romantic band fade. Suddenly you realize they’re more enthralled by the notions of romanticism and idealism that never fail to lead all hearts astray. Future Islands have always been there, on the outside looking in. With ‘Singles’ they step inside us and start looking out and it’s joy to finally join them.
– Christopher Tipton 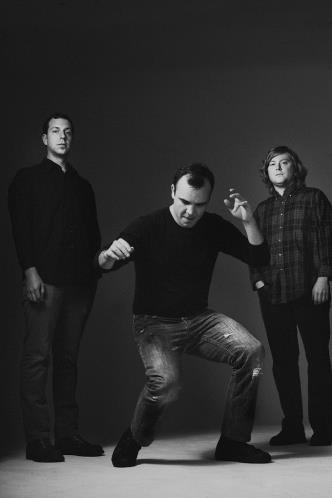