All Ages
Doors open at 7:30pm
This event - now in its third year - is a night to celebrate one of rock's most influential vocalists in Chester Bennington from Linkin Park as well as provide a forum to discuss mental health + suicide prevention. This year's edition of From the Inside will feature performances from Jesse Hasek + Brian Vodinh, Emerge and Chad Grennor at Open Chord in Knoxville, TN on July 18th, 2019. There will be a silent auction, unique merchandise as well as an open mic in-between sets for anyone wanting to discuss mental health awareness or what music means to you. Of course, you can expect some of your favorite Chester/LP songs to be rocking the speakers before and after the show as well.
Net proceeds from the evening benefit Linkin Park's charity Music for Relief
Presented by Filthy Nasty Productions & LPLive 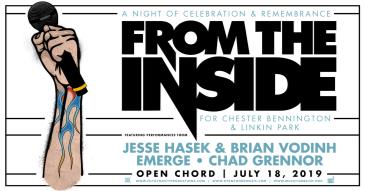