AVALON Hollywood proudly welcomes back Freedom Fighters as part of their Edge Album Tour, with support from Christopher Lawrence and Jonathan Allyn. Freedom Fighters is the alias of Psy-Trance producer, personally known as Shahaf Efrat from Tel Aviv, Israel. The golden egg of HOMmega, along with acts like Astrix and Juno Reactor, Freedom Fighters is responsible for some of the most heavy hitting psy-trance in the world.

His debut album 'Rebel' in 2015 was a smash for music fans, not only hitting #1 on Beatport, but overtaking its 'Top Selling Albums' title for over a month. Now fresh off the release of his 2017-released record 'Edge', he's bringing the new tunes around the globe with a well-deserved spot here in Hollywood.

Joining along for the show is AVALON regular and trance kingpin Christopher Lawrence. One half of the globally renowned duo Fleming & Lawrence, Christopher is a force to be reckoned with in the wide world of trance and will be warming up the room proper.

Per usual, AVALON is the place to be for Saturday night activities. Don't miss Freedom Fighters, Christopher Lawrence and Jonathan Allyn on Saturday, March 10th. 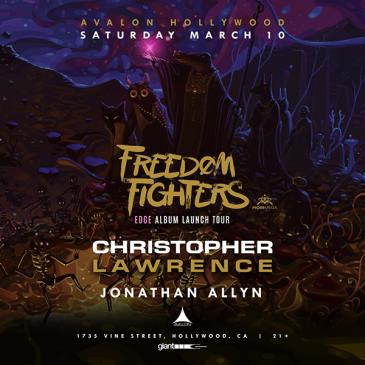