Withthe ability to sing and play a large variety of instruments it’s obvious thatmusic comes naturally to Flux Pavilion aka Joshua Steele. Since first sittingdown at a keyboard at the age of six his dream has been to make music that heloves, and perform it to people who love it just as much. Influenced by thelikes of The Prodigy, Basement Jaxx and dubstep pioneer Rusko, Flux loved thehigh energy madness that dance music was capable of and set about making someof his own in the form of dubstep.

Already adept with production skills he wassoon off the starting block and with his tunes swiftly generating interest onthe circuit, it was soon clear that what started of as a bit of experimentationhad led to Flux landing on his feet with the dubstep sound. Before long labelswere banging at his door itching to release his music so he decided that theworld was ready for a bit of Flux Pavilion! Signing tunes to Rottun, Shift, XSRecords, Stupid Fly and Dubmented Beats and working with artists such as Datsikand Trolley Snatcha, his tunes were soon dominating the charts and starting toreceive a lot more interest from the big boys. Next Ntype featured his track‘Fucking Noise' on his ‘Rinse Mix' CD, and not content with that then signedFlux’s track ‘Meathead’ to his label Wheel & Deal. This was a massive lookfor Flux and got his name out there to all the DJs: soon enough no club wassafe from one of Flux's bangers and the bookings came flying in all over the UKand Europe. Well known for his high energy performances and smashing anthemsFlux is now performing all over the globe - watch this space for information ofup-coming dates near you. 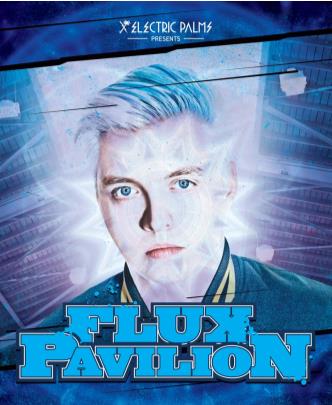