Flanelhed is an all original rock band founded in Marin County California in 1994. The band is a blend of classic and modern progressive heavy rock music, which remains rooted in a strong sense of melody and focused songwriting. In 2019 Flanelhed are celebrating their 25th anniversary, welcoming new bass player Jeff Cox and the exciting release of their new album “Seven” which has been four years in the making!

"Seven" is a consummate example of this tried and true Bay Area rock band's polished heavy sound. Consisting of some of the band's tightest, catchiest songwriting to date. The album was engineered and mixed by the venerable Snake Green, guitarist from Bay Area bands The Devil in California & Skinlab. Get your copy at this very special album release show & celebration of the band's 25th anniversary!

Since Flanelhed began in 1994 the band have consistently performed all over CA. They released their first CD in 1996 and played to sold out crowds opening for Y&T. Throughout this period Flanelhed opened for such acts as “Big Brother & The Holding Company”, “The Average White Band” and “Laundry” (featuring Herb Alexander from Primus), as well as continuing to headline their own shows all over the Bay Area.

In the early 2000's Flanelhed explored a more acoustic sound and recorded "Chameleon" and the “Little Black Dog” album was released in 2003. They returned to their rock/electric roots in 2008 and released their 4th album “Amnesia”. In 2012 Flanelhed completed their 5th album “Static” and were quickly signed to to the Global Recording Artists label. Later that year Flanelhed played the 45th Anniversary of the historic Monterrey Pop Festival. In 2013, Flanelhed performed at the Novato Art & Wine Festival w/ “The Tubes”. Flanelhed celebrated their 20th Anniversary that year with the release of their 6th CD: Flanelhed “Live” recorded in Oakland in Sept. of 2013.

Oakland rock band STIMULI opens the show playing in support of their debut album 'They Are We'.

This special celebration of one of the longest running hard rock bands in Marin County is not to be missed! 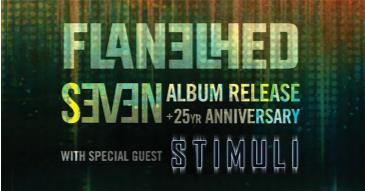