100 Boyfriends Mixtape (2016) [14m 9s – Written and Directed by Brontez Purnell]
Veteran Bay Area performer and artists, Brontez Purnell makes his directorial debut with this semi-autobiographical “videomix tape”, which was filmed on digital video, VHS and 8 MM film. Relying on his punk rock aesthetic to give the world a peek into his singularly unique perspective, 100 Boyfriends Mixtape takes the viewer on an unforgettable ride that’s as audacious and hardcore as it is experimental.

Taxi Zum Klo (1981) [1hr 38m– Written and Directed by Frank Ripploh]
Taxi Zum Klo also stars Frank Ripploh. The film is a dark comedy of manners that wryly explores the life of a Berlin school teacher and the contrasts between his public and private lives. Shot on location with many characters appearing as themselves, the film documents gay culture in West Berlin in the brief moment post gay liberation and before the onset of AIDS, around 1980.Ripploh has stated that much of the film was autobiographical.

Times shown are when doors open.
Films begin ½ hour after that.

FREE for ToFF Members
ToFF members enter your ongoing 9 digit award number into PROMO CODE above for one free ticket.

All Advance Tickets Sales Are Final. 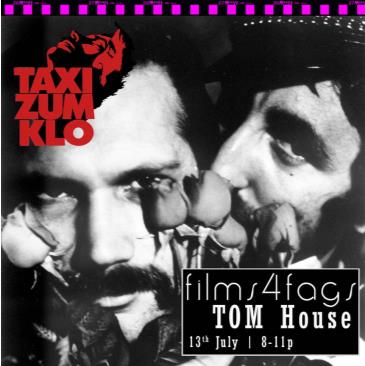