FAST FILMS: HERE AND GONE IN SIXTY SECONDS:
Each moment is sandwiched between the past, which is fixed in our memories in important personal and historical narratives now "gone," and the future which we can determine by our actions in the present by constructive social agency in the "here." This screening of 60-second shorts will explore the vast array of what the “here” and “gone” can connote in experimental film as it pushes the envelope of possibilities into the future. (Curated by Rex Bruce, Director, Los Angeles Center for Digital Art.)


“Gone: The Past Looks Back"
Directed by
William Almas


“The Pursuit Of Happiness Volume 1”
Directed by
Bill Farroux


******
IF IT’S SUMMER IN THE CITY, THEN IT’S TIME FOR DOWNTOWN FILM FESTIVAL L.A.
The award-winning Downtown Film Festival L.A., now in its 5th year, will be held this year July 10-20 at the Downtown Independent Theater, the AT&T Center Theater, The Grammy Museum Clive Davis Theater, and alternative venues throughout downtown, July 10-20. 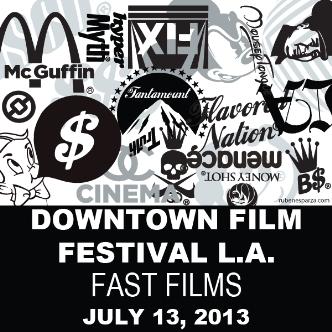