Rise-up Electric at The Republik

Honolulu – Halloween on Oahu just got an electric shock with the announcement of DJ BL3ND set to take the stage Saturday, October 31st for Fantasy House. Bl3nd, a DJ Mag Top 100 DJ makes his return to Hawaii to headline at The Republik.
This combination Dance and Costume party will bring together light, sound, and movement to create a memorable night of electronic music with one of the world’s most popular DJs.
Few electronic artists can match the stage presence and energy of DJ BL3ND. In the short time he’s pursued his career, the Los Angeles native has created one of the most loyal followings of any DJ. With a staggering 360 million YouTube views, 1 million YouTube subscribers, and more than 4 million Facebook followers, DJ BL3ND has won legions of superfans (known as BL3NDERS) across the globe with his exuberant viral videos and electrifying live sets.
Over the years, his success has been documented by everyone from Billboard, to SoundCloud, to DJ Mag. He’s the record-­‐holder on Billboard’s Uncharted Chart, holding the top spot for 62 weeks and remaining in the charts for a total of 103 weeks; and he was named SoundCloud ‘Artist of the Year.’ He won his hard-­‐earned place in the prestigious DJ Mag Top 100 in 2013, coming in at #91, and in 2014, jumped to #78 on the chart, solidifying his position as one of the world’s top performers.
Supporting performances include BAUMER, who has added another EDC Las Vegas to his resume and will close out the year after Fantasy House with a performance at EDC Brasil in December. Also scheduled is OMIA, RIDDLIN, EPIC TRAUMA, and more performers to be announced.
Rise-­‐Up Electric (Formerly Electric Boat Cruise) is a Hawaii based event and entertainment company that strives to bring experience driven parties to Hawaii’s Dance and Electronic Music community. 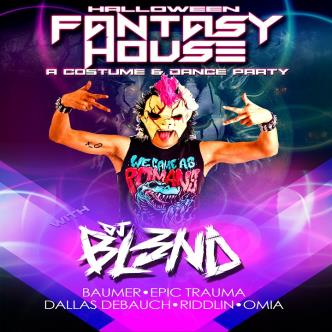