FIT FOR AN AUTOPSY

MassConcerts at The Palladium Upstairs

It seems there’s a new catastrophe hitting the headlines everyday, from corrupt politicians and crooked business people, to criminal mischief and the oppressive renegades within the ranks of those entrusted to protect the people from crime; extreme divides between rich and poor, ideological battles, shrinking resources, the constant threat of war, terror, famine, disease. The problems of the world are every bit as grim, perhaps more so, than during the Cold War, when protest, counterculture, and music from punk to thrash helped give voice to the voiceless.

The crushing music of Fit For An Autopsy is for any fan of extreme metal, as it’s devoid of preachy politics or grandstanding soapboxing, but its sound and fury is absolutely unflinching in purpose. The band expertly blends excessive-force fueled death metal with atmospheric groove and impassioned personal diatribes, reflecting back the dark state of current events. Their fourth album, The Great Collapse, doesn’t waste time with fantasy bullshit or cliché gore horror. Fit For An Autopsy are metal guys, to be certain, but they grew up in the hardcore scene. They embrace the responsibility to put as much devoted purpose into their lyrics and message as they do into their dense, heady, songs, forging a magnificently powerful new post-deathcore. 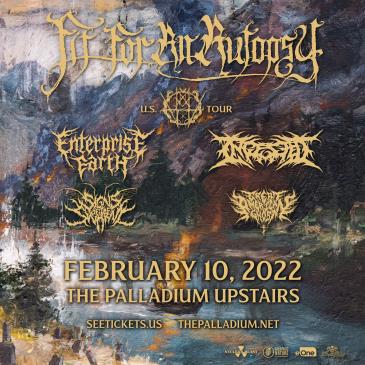 Fit for an Autopsy