AJ Lee & Blue Summit are pure, beautiful American music. Soaring harmonies, top notch picking and strumming as well as a healthy respect and reverence for the classic country, bluegrass and folk music of the past all add up to a band who are masters of the genre. That’s not to say that AJ Lee & Blue Summit are antiquated in anyway. While the band tips a hat to the American masters of the past, their sound is modern and thoroughly of today. The band are great torch bearers of the music that helped build America.

A deeply evocative banjo player, clever songwriter and rhythmic dancer, with a powerful voice that draws you in – EVIE LADIN is “a natural entertainer with a gift for infusing folk practices with contemporary verve,” San Francisco Chronicle.

Barreling full-steam out of trad Old-Time into the urban environs of Oakland, CA, with side trips into a global percussive dance scene, Evie brings deep roots to collaboration with the BAND. Tenacious, innovative string musicians/dancers with a quirky neo-trad soul, the ELB throws down a new folk music with an unusually creative and surprising live show.

Erik Pearson (guitar, banjo, vocals) is a musician’s musician with the Crooked Jades, storyteller Diane Ferlatte, and his solo projects. His original banjo tune “Fork & File” was the soundtrack for a rapids rafting scene in Sean Penn’s movie Into the Wild. 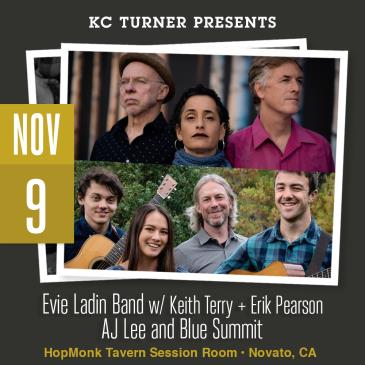