Safehouse Lounge opens at 6pm 21+
Concert Hall doors open at 7pm All Ages accompanied by an adult
*******************************************************************************************************************************************
Blessed with a striking stage presence and a powerful voice, singer-songwriter-guitarist Erin Smith leaves a lasting impression.  No one ever forgets the first time they hear her, she’s got that ‘je ne sais quoi’ that draws you in and a dynamism that brings you  back for more.
No stranger to style, Smith characteristically comes armed with her signature red lipstick, high heels, big hair, bold stage personae and quirky, stylish outfits.  Her powerful voice is a force to be reckoned with and at any time she can belt out a tune that often drives comparison to Adele, Florence & The Machine, Alicia Keys, Chrissy Hynde from the Pretenders and Karen O from the Yeah Yeah Yeahs. However make no mistake, there is only one Erin Smith and she will rock you.
2015 marks the release of Erin’s new album, ‘American Boy’.  The first single, reggae/ska/pop/hip hop song ‘Love Long Distance’ was released on March 5th, 2015. By March 13th, the song had landed in the #3 position on Star 101.9’s new music charts, right between Imagine Dragons and Mumford & Sons. Erin is the first Hawai’i artist to ever land a position in the new music charts at Star 101.9, Honolulu’s mainstream alternative station, and is the first Hawai’i-based artist to ever have a song played in rotation on the station. ‘Love Long Distance’ , features a rap by Honolulu hip-hop and tattoo artist, Illis It.
Growing up in a large musical family in Canada, Erin spent her childhood singing, performing and learning violin & guitar. After graduating from York University in Toronto (theater and art history), Erin began performing in Canada and the States alongside notable acts (Feist, Tegan and Sara), and was quickly asked to perform at major Canadian festivals, namely North by Northeast and Canadian Music Week.
In 2004, Erin moved from the eastern Canadian shores to Maui to expand her career. Soon after landing she amassed a local cult following and formed the ‘The Throwdowns’ with musical buddies, Ola Shaw, Kimo Clark & Ian Hollingsworth.  Together, they instantly dominated the local charts with their anthem ‘Kihei Town’ and reggae classic ‘Stay HI’ featuring Marty Dread.  Since their formation in 2009, the group released two albums, have been nominated for three Na Hoku Hanohano awards (Hawaiian Grammys), and performed with national acts; The Fray, Train, Matisyahu, Bad Brains, The English Beat, Panic at the Disco, 311, Steel Pulse, The Dirty Heads and many others.  But Erin was determined to identify herself outside of her band as a solo artist and in the winter of 2012, Smith received an opportunity to travel to Montreal and record a solo album at studio Mixart, a facility involved in Arcade Fire’s critically acclaimed album ‘Funeral’.  It’s her new solo album that allows her to showcase a more indie-rock, vulnerable and torch sound.  The album, suitably named ‘American Boy’ is set to be released in early 2015, with the lead single “Love Long Distance” featuring Illis It.
“This album to me is about being a woman in our modern times, about change, about women’s roles in the lives of the people they love, and about being fiercely you, through all adversity” Smith enthusiastically explains.  ”Women play so many roles, lovers, sisters, mothers, wives, girlfriends, confidantes, fill households with love, and provide femininity for the men in their lives.  But we are also independent, hardworking, loyal, fun, loving and true.  This album to me is about change, hope, balance and a big life full of triumphs and mistakes.  It’s about loving yourself through it all.”
“The title track “American Boys” is about taking the steps necessary for yourself, while remaining loyal to those you love in your life.  It’s about putting yourself first. As they say, you can’t take care of those around you, unless you are being the best YOU possible.”
Backing her up on her new album, is Erin’s Oahu-based band. Supporting her songs, from the reggae bump of “Love Long Distance” to the driving indie-rock vibe of “Blind Leading the Blind”, this band of stylish, accomplished musicians kill it onstage, every time.  Band members are Gunso Kawai (bass), Cassie Fillhart (keys/backing vocals), Matt McPherson (guitar) and Josh Guerra (drums). The band has been garnering opening spots for national acts (Sublime with Rome) and performing at festivals and events.
Currently, when she’s not enjoying her Kailua beach cottage, Erin can be found focusing on her new solo sound and writing her popular weekly blog: “Heels & Picks” for the Honolulu Star Advertiser’s entertainment website, Honolulu Pulse.  Erin’s writing is often featured in the print version of the Star Advertiser, and she is a regular writer and fashion stylist for other major magazines as well.  This past year has seen Erin score major interviews with musicians she admires, including Joan Jett, Grace Potter and Hayley Williams (Paramore). When she is at home, Erin is an extremely popular vocal, violin and guitar coach on the windward side of Oahu, often seeing upwards of forty-five students a week, with waiting lists to work with her.
As a true artist, with a deep commitment to music, art, fashion and writing, the sky is the limit for Smith, and she has only just boarded the plane. 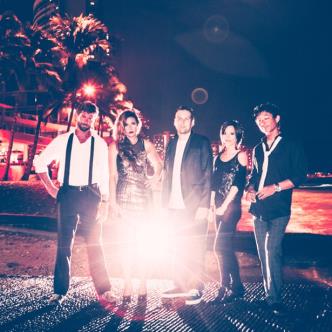