Welcome to the next phase of the Emo Night evolution! Be honest: how many times over the years have you been watching your favorite band and wanted so badly to be up there with them? Well, now's your chance, superstar. Our live band - Grand Theft Autumn - will be playing all your favorite 2000's emo & pop punk bangers, and YOU are doing lead vocals! No DJ, no laptop playlist, no backing tracks. Just drums, bass, guitars, you on the mic, and an energetic crowd shouting every word back at you.
Now, we could go ahead and release the set list for the night, but instead we've constructed the world's longest run on sentence to give you some clues where the night is headed!
The year is 1985: that American idiot Mr. Brightside with the fat lip wants to invite Stacy’s mom Helena, aka Miss Murder, his “dirty little secret”, to the rock show on Ocean Avenue for their first date so they can dance, dance the night away and makedamnsure they’re writing sins not tragedies but say it ain’t so he’s his own worst enemy and cut from the team because all the small things welcome home his famous last words that he’s not okay with the misery business that’s leaving him face down in the dirt when he realizes what it is to burn when he’s in too deep stuck in the middle wishing he should have buried a lie and picked his friends over you but dammit Maria count me in sugar we’re going down and I miss you: where is your boy tonight?
Friday, June 3, 2022
@ Growlers
Doors at 7:00 PM
Show at 7:45 PM
$15 ADV / $15 DOS
All Ages
** SONG SIGN-UPS WILL START AT 7 PM AND WILL BE FIRST COME FIRST SERVE! So, if you've spotted a song you desperately want to be yours, it's HIGHLY, HIGHLY RECOMMENDED you come early to try and snag it! **
** YES - you AND a friend can sing a song together - but let's not go wild, limit it to a duo max ** 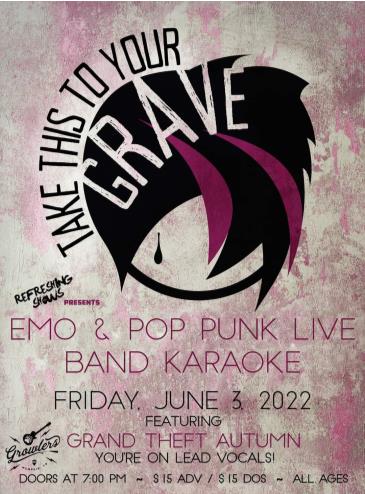 Show Map
View 1911 Poplar Ave in a larger map
We use cookies to provide you with the best experience possible. By using See Tickets, you accept our cookie policy.
Accept
ftr1:0