Everybody’s got that pal they turn to whenever they need a party, and for a long time Eddie Spaghetti, Supersucker Soul Brother Number One, has been that guy. Revelling in the center stage spotlight and the wallop of thousands of PAs for thousands of shows across the land, Eddie’s learned how to coax the inner life of the party out of all of us. His solo career is an extension of his life-long love of roots music, but full of pop hooks and wiseguy humor delivered with a brain, a heart, & a beer.

Eddie grew up in Tucson, Arizona trying desperately to ignore the country music that floated all around him. Seems like every pick-up truck and storefront speaker was cranking out the syrupy wails of some heartbroken hick and he just wasn't having it. So, as a kid, he turned to Heavy Metal, then Punk Rock, to block out the noise and that's how his band, The Supersuckers, was born. Formed in late '88, The Supersuckers aim was to strip away some of the pretense of late '80's Heavy Metal and put a little showmanship into the Punk scene. It was a tightrope act few bands could achieve but, by the beginning of '89, not only had the band done it, they were ready to make a move away from the dirt roads, dead ends and dust of their hometown. Heads was New Orleans, tails Seattle. Tails.

And, in May of 1989, off they went. Having no clue that Seattle was about to become "Rock City, U.S.A." for a few great years, Eddie and his grimy gang jumped blindly into a scene that had been thriving unrecognized for years. It didn't take long however for them to find Seattle to be the perfect place to "not fit in". The Supersuckers put out a few singles, then signed to Sub-Pop and began what has been over two decades of ass kicking, ground pounding hemi-hogging punk-n-roll. It didn't take too long, however, for the country music that he tried so hard to avoid in his youth to start surfacing in the music Eddie was making as a young man. The foray back to the country began in 1993 with the Supersuckers side project, The Junkyard Dogs and the rare, hard to find and out of print recording, "Good Livin' Platter" (Sympathy For The Record Industry).

It wasn't county per-se, but it was close and the seed was planted. 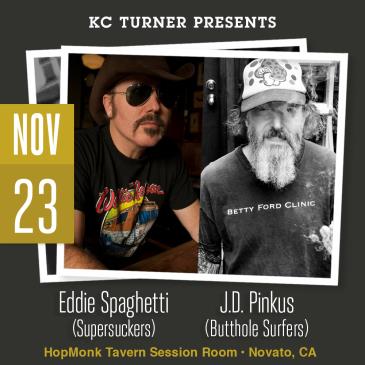